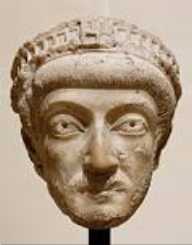 Theodosius II was born on April 10, 401 to Arcadius and Aelia Eudoxia. In 402, he was proclaimed co-Augustus by his father. He was the only son of his parents. When he was seven years old, his father died, and he succeeded him. He became Emperor of the Eastern half of the Roman Empire at a young age. The Sasanian King, Yazdegerd, became Theodosius’s guardian. In 414, his sister Pulcheria received the proclamation Augusta. She later on assumed regency and guided Theodosius. In 416, Theodosius became Augustus in his own right. This meant that the regency would now end and it did.

In 421, Theodosius II married Aelia Eudocia with whom he had a daughter, Licinia Eudoxia. They later separated when Eudoxia moved to Jerusalem since she preferred monastic Monophysitism. Theodosius started developing an interest in Christianity due to the influence of Pulcheria. His beliefs made him go to war against the Sassanids. The Sassanids were persecuting Christians at that time.

The war came to an end but after the Romans were coerced into accepting peace as the Huns menaced Constantinople. In 423, after the death of his uncle, Western Emperor Honorius, Theodosius opened war against Joannes who became Emperor after Honorius’ sister Galla Placidia sought his help.

In 425, Theodosius II founded the University of Constantinople with only thirty-one chairs, that is, sixteen in Greek and fifteen in Latin. Subjects taught at the university included astronomy, geometry, philosophy, law, medicine and music among other subjects. In 429, he ordered for the systemization of all laws since the reign of Constantine I. He appointed a commission to handle all the work. The first commission did not do a good job hence a second commission appointed and it was successful.

The success of the commission led to the publication of the Codex Theodosianus in 438.  Theodosius II led numerous wars against Huns which were successful but later on in his life he started losing most of the fights. In 428, he met monk Nestorius in Syria and appointed him Archbishop of Constantinople. The monk got involved in disputes of two theological debates as to the real events of the birth of Jesus Christ but never reached a consensus.