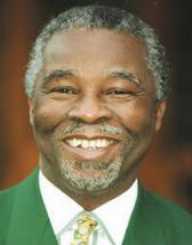 Thabo Mbeki is a South African politician and the second president of the country. Born on June 18, 1942, he served in office from June 1999 to September 2008, nine months short of his second term. He resigned from office on September 20, 2008, due to accusations of interfering in the National Prosecuting Authority including the prosecution of Jacob Zuma on corruption charges. A judgment by Judge C.R. Nicholson found Mbeki guilty of the allegations, which necessitated the National Executive Committee of the ANC, to call for his resignation. This judgment was, however, reversed by the Supreme Court of Appeal on January 12, 2009, in a unanimous decision.

Before rising to the office of president, Thabo Mbeki served as the deputy president to Nelson Mandela from 2002 to 2008. He also held several positions in the ANC, while in exile and back home.

Thabo Mbeki's administration saw an average of 4.5% annual growth rate of the South African economy. He introduced the Black Economic Empowerment (BEE), which expanded the Black middle-class. However, the policy demanded high skilled professionals, failing to address the high rate of unemployment among the unskilled majority in the country. He also attracted a substantial amount of Foreign Direct investment (FBI), making South Africa the centre of Africa’s growth.

On the African front, Thabo Mbeki mediated in peace agreements in countries like Ivory Coast, Burundi, and the Democratic Republic of Congoand instrumental in the transition of the Organisation of Africa Unity (OAU) to African Union (AU).

His administration also came under intense criticism for several reasons including being an intolerant response to people who accused his administration and his position on AIDS, as he questioned the relation between HIV and AID

Thabo Mbeki was born on June 18, 1942, in Mbewuleni, Cape Province of the then Union of South Africa. He was one of the four children of Govan and Epainette Mbeki, who were both teachers. His father was a staunch member of the ANC.

Thabo Mbeki received his primary education in Idutywa and Butterworth and continued at Lovedale, Alice for his secondary education. He was however expelled from school after a student strike in 1959. He then sat for matriculation examinations at St. John’s High School in Umtata that same year. He later passed his A-level exams in Johannesburg and enrolled as an external student at the University of London to pursue economics. He then continued his education at Sussex University graduating with a bachelor’s degree in 1965. He received his masters in Economic Development from the university in 1968.

Coming from a family with strong affiliations to the ANC, Thabo Mbeki was involved in party activism even as ANC was outlawed. He helped in mobilising students and later became the secretary of the African Student’s Association in 1961.

Thabo Mbeki went into exile in 1962 upon the instructions of the ANC. He left the country with other members in disguise of a football team to Botswana, later to Tanzania and finally moving to London to continue his education. While in London, he was involved in several protests against the apartheid rule and the restriction of political activities in his home country. All this while, he was a loyal supporter of the Soviet Union, since they offered the ANC with military training, arms, and educational support.

While pursuing his masters from Sussex University, Thabo Mbeki moved to London, where he worked for the ANC on full time. After receiving his master’s degree, he left for Moscow in February 1969, for one-year military training at the Lenin International School. While there, he was trained in advanced guerrilla warfare at Skhodnya among other things before leaving for Lusaka with his godfather Oliver Tambo. In Lusaka, he was appointed an assistant secretary of the ANC Revolutionary Council. He also spent some time in Botswana, Swaziland, Nigeria, and Zimbabwe.

He held several positions in the ANC including the ANC's director of the Department of Information and Publicity in 1985. He was instrumental in turning the international media against apartheid and liaised with other foreign governments and international organisations.

The ban on ANC and holding of political activities in South Africa was lifted in the 1990s, and Mbeki played a vital role in converting the ANC into a legal, political organisation. While Nelson Mandela was chosen to lead the ANC for the first democratic election in South Africa, Thabo Mbeki was elected as his deputy president in May 1994. In December 1997, he was selected as the ANC president and eventually became the president of South Africa in June 1999. After his first term, he was re-elected in 2004 to serve a second term. His deputy president was Jacob Zuma.

Thabo Mbeki succeeded in introducing several policies in South Africa when he took office. Not only his country, but he was also involved in several mediation efforts on the African continent. He led the formation of the New Partnership for Africa’s Development and the transformation of the Organisation of Africa Unity to the African Union. Mbeki was an instrument in the mediation of peace in Cote Divoire, Democratic Republic of Congo and Burundi among others.

Despite his successes, Thabo Mbeki also came under intense criticism for various reasons including the rise in crime, including the xenophobic attack in 2008, that left 42 people dead and many others injured. There were also power crises in 2008 leading to power rationing. He was also criticised for not forcing long-term president of Zimbabwe, Robert Mugabe, to step down in the midst of high economic condition and hardship in the county.

Thabo Mbeki resigned as president on September 21, 2008, after his lost the support of the ANC National Executive Committee. All this started when he removed his deputy president and president of the ANC, Jacob Zuma from the post due to corruption charges in 2005. Zuma later also faced raped charges. There was an allegation that the charges were politically motivated and behind it was Mbeki.

A judgement by Pietermaritzburg High Courts at by Judge Chris Nicholson, concluded on September 12, 2008, that the allegations against Zuma were unlawful and politically motivated and cleared Zuma from all wrongdoing. This led to Mbeki’s resignation, about eight months short of his second term. The deputy president Phumzile Mlambo-Ngcuka succeeded him until the next elections in April 2009.

Thabo Mbeki married Zanele Mbeki on November 23, 1974, at Farnham Castle in the United Kingdom. The couple has no child. Mbeki at the age of 16 had a son called Monwabise Kwanda, in his previous relationship with Olive Mpahlwa. Monwabise Kwanda however, disappeared in 1981, after going into exile in Swaziland in 1976.