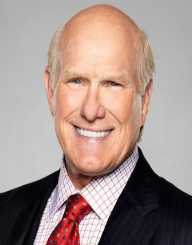 Born in Shreveport Louisiana on the 2 September 1948 to Novis nee Gay and William Bradshaw, Terry Bradshaw was the couple's middle son. Older brother is Gary, and younger brother is Craig.

Terry Bradshaw spent his early years in Camanche Iowa where his love of football was ignited.

When the family returned to Shreveport  Terry went to Woodlawn High School, and it was there that he met and played under coach A.L. Williams. Later, Terry enrolled at Louisiana Tech University in Ruston where he was greeted with excitement because of his reputation as a footballer. In 1969 Terry was considered by professional scouts to be the most exciting college football player around.

Terry was the first overall player selected by Pittsburgh Steelers in the 1970 NFL draft. He was considered the number one pick. Terry became a starter in his second season. During his first few seasons, he was not treated well by the media. They sniped about his rural upbringing and made derogatory remarks about his intelligence. Terry proved his detractors wrong on all accounts.  The Steelers won eight AFC Central Championship and four Super Bowl titles with the help of Terry Bradshaw 's powerful arm. One of the most notable plays in NFL history took place in 1972 when he threw a pass to Franco Harris which led to the defeat of the Raiders in the AFC Divisional playoffs. During the 1974 AFC Championship Game, his fourth quarter touchdown pass to Lynn Swann resulted in a 24-13 victory against the Oakland Raiders.

In 1976, Terry Bradshaw  missed four games due to injury, then Franco Harris and Rocky Bleier were both injured and the Steelers were beaten by the Oakland Raiders 24-7 in the AFC Championship game that year. Terry won the Most Valuable Player award at the Super Bowl XIII between the Steelers and the Cowboys.  In 1979 Terry won his second Super Bowl MVP in a 31-19 win over the Los Angeles Rams in 1979. All in all, Terry was an outstanding quarterback for the Steelers. In 1980 he won the Super Bowl MVP Award after his team had beat the Los Angeles Rams. Shortly after this Terry required surgery on the muscles in his elbow. He rushed to return to his sport and this caused permanent damage, causing him to retire in 1983. Upon retirement, Terry had played fourteen seasons with Pittsburgh, won four Super Bowls (in 1974, 1975, 1978 and 1979 ).

In 2006 Terry Bradshaw did not attend celebrations for past Super Bowl MVPs, despite the Steelers presence during the Super Bowl Xl in Detroit. There were rumours that Terry was asking US $100,000 and the NFL declined to pay it. These reports have since been refuted. Terry is on record as saying that there were reasons other than money. His reasons were that he was spending time with his family and at the time was not wanting to be in large crowds.

In 2006 Terry Bradshaw  donated a number of items to Louisiana Tech including his four Super Bowl Rings and a helmet and jersey from one of his Super Bowl victories.

After his retirement from football in 1984, Terry Bradshaw  joined CBS as an NFL game analyst and has since had a successful career in broadcasting. Terry is acknowledged as one of the best analysts of the game. Ten years after joining CBS and  NFL Today, he moved to Fox Sports.

Terry Bradshaw  has had a varied career. From his early days as a car salesman during his off-season periods with the Steelers to broadcaster, motivational speaker, author, actor and musician. His books include Keeping It Simple (2002) and Terry Bradshaw :  Man of Steel (1979).  Musically, he had a country hit in 1976 with the Hank Williams classic I’m So Lonesome I Could Cry.

Terry Bradshaw  has suffered from anxiety attacks which included weightloss, crying and insomnia. He has said that he was diagnosed with clinical depression and takes medication regularly to help cope with it. He spoke out about his battle with depression in order to help others. He also had a serious elbow injury which lead to his retirement from NFL in 1983.

Terry supports the Republican Party and in the 2012 said that he supported Newt Gingrich’s Republican Presidential Nomination.

Terry is a born-again Christian.

Associated Press named  Terry was named NFL’s Most Valuable Player in 1979 and he was also named All-Pro and All-AFC that year. Also in 1979, Terry shared Sports Illustrated magazine’s “Sportsmen of the Year” award with Willie Stargell, a fellow Pittsburgh star.  In 1984, he was inducted into the Louisiana Tech Sports  Hall of  Fame as well as the State of Louisiana Sports Hall of Fame. He received a star on the Hollywood Walk of Fame in 2001. Terry has been voted one of professional football’s most popular retired players. Terry, Franco Harris and Joe Greene were all selected for the Pittsburgh Steelers 75th Anniversary All-Time Team in 2007.