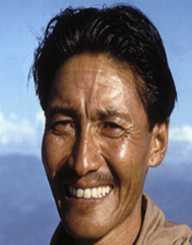 Tenzing Norgay was born on May 29, 1914, in Khumbu, Nepal. His father was Ghang La Mingma, and his mother was Dokmo Kinzom. He also had 12 siblings. He later changed his name to Tenzing Norgay when he was a teenager working as a sherpa.

Tenzing Norgay always had an appreciation for the serenity and purity that nature offered. In his teen years, he studied at the Tengboche Monastery to become a monk. However, he did not complete his training and decided to take his life down a different path. He still remained in the Buddhist religion for the rest of his life, though.

Tenzing Norgay had a habit of running away from home when he was young. When he was a teenager, he ran away and settled in the Too Song Bhusti Sherpa Community in Darjeeling, Nepal. He worked as a sherpa until he was recruited to help with a reconnaissance mission in 1935. It was around this time that he was first invited to try to climb Mount Everest.

Tenzing Norgay officially started his mountain climbing career in 1935. Throughout the late 1930’s he worked on many climbing expeditions in Nepal, India, and other countries surrounding the Himalaya Mountains. In 1947, Tenzing Norgay trained to climb the tallest mountain in the world, Mount Everest. While he did get far in this attempt, he was not able to reach the top of the mountain. In the same year, he did have other successful mountain climbing missions, though. In the first couple years of the 1950’s, he worked with US and UK expeditions, as well as a separate Swiss expedition. On the Swiss expedition, he reached a new record (about 8,500 meters high) on the mountain, but he still did not reach the top.

In 1953, Tenzing Norgay began a new expedition with John Hunt and over 400 other people. This expedition was more rigorously planned than any other he had taken a part of before. It was in this attempt that he was finally able to reach the top of Mount Everest. He was one of the first two people to successfully climb to the peak of the mountain. His climbing partner, Sir Edmund Hillary, was the other first person to make it to the peak of the mountain. Others had tried before him, but they had either given up or perished on the way up the mountain.

After achieving his mountaineering feat, he basked in the fame he gained from it for a while. Sometime after coming own from the mountain, and out of the limelight, he became the field director at the Himalayan Mountaineering Institute. He worked in this post for about twenty years.

In 1978, Tenzing Norgay founded his own mountaineering company: Tenzing Norgay Adventures. In this company, he led mini expeditions throughout the Himalayan Mountains to anyone who thought they were up for the challenge.

Tenzing Norgay won several awards for his mountaineering feat. One of the awards he won was the Tiger Medal from the Himalayan Club in 1938.

Tenzing Norgay was also honored by the government of Nepal for his mountain climbing feats. In 1953, he was given the Order of the Star of Nepal, 1st Class. He later received the Padma Bhushan (a high-ranking civilian award) in 1959.

Tenzing Norgay was listed in Time Magazine’s 100 Most Influential People of the 20th Century.

Tenzing Norgay died on May 9, 1986, in Darjeeling, India. The cause of his death was a cerebral hemorrhage. He was 71 years old when he passed away.