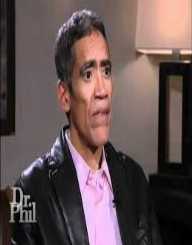 Voice-over artist and radio journalist Ted Williams was born on the 22 September 1957 in Brooklyn, New York.

After school, Ted Williams spent three years in the U.S. Army and left with an honorable discharge. Later, Williams trained in voice acting.

Initially, Ted Williams worked for WVKO (AM) in Columbus doing the night shift. His life started to spiral out of control because of substance abuse (1986), and he was arrested on charges of drug possession and robbery. Williams had two stints in jail. Three months for theft  (1990) and two months for theft, forgery, and obstruction with the law (2004). He lost his house in 1994 and was homeless for twenty years.

Man With the Golden Voice

In January 2011, an interview with Ted Williams, who was homeless at the time. A videographer had seen Wiliams standing with a cardboard placard advertising his voice and requesting financial assistance was made available on the Columbus Dispatch website. The video went viral with sharing on YouTube.com and other social media outlets.

At the time the video was going viral, and media outlets began asking who the homeless person was, Ted Williams had no idea he was being sought. He found the first attention overwhelming as job offers,  money and clothes started flooding in. A fundraising effort began with a website TedWilliamsYourVoice was set up The Cleveland Cavaliers NBA basketball team offered Williams a job and a home.

One job offer involved voice working with the Cavaliers and Quicken Loans Area. MSNBC hired him for network voice-over work, and Kraft featured his voice on in a television campaign. He appeared on the reality show Second Chances at Life as host. Williams published a book, A Golden Voice: How Faith, Hard Work, and Humanity Brought Me from the Streets to Salvation (2012).

He also appeared in a Pepsi advertisement and became known as the man with the golden voice. He worked at a radio station in Marion, Ohio.

Ted Williams said in a 2014 interview that he was struggling financially because he had trusted the wrong people financially and had problems with management of his money of $395.000 book advancement.

He also confirmed in the same interview that he was clean and sober. Williams was later quoted as saying the journey from homeless to Hollywood was hard, too much, too quick and he relapsed.

Ted Williams is married to Carol Gibson and the father of nine children, seven daughters, and two sons.