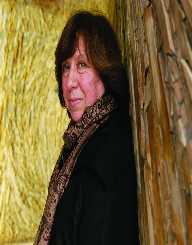 Ukrainian journalist Svetlana Alexievich is an award-winning writer. Some of her notable works include Zinky Boys: Soviet Voices from the Afghanistan War and Voices from Chernobyl.

Svetlana Alexievich started at Minsk University in 1967 and graduated with a degree from the Department of Journalism in 1972.

While at the magazine, Svetlana Alexievich earned a promotion as the head of the non-fiction section.SvetlanaAlexievich's writing style demonstrated her experimentation of different genres.Svetlana Alexievich was keen on documenting the experiences, observations, and memories of the people who were at events and dealt with the various circumstances.

Svetlana Alexievich was able to express the human feelings from interviews while documenting the facts. Alexievich wrote her first book The Unwomanly Face of War, but it took years for it to be published. The second book, The Last Witnesses 100 Unchildlike Stories established a new genre of war literature. The 1989 novel Zinky Boys Soviet Voices from the Afghanistan War took the oral histories of the mothers and widows of the soldiers who died in the ten-year war. Her novel Enchanted with Death was adapted for the film The Cross while Voice from Chernobyl was made into a documentary released in Luxembourg.

Svetlana Alexievich has been on the advisory committee for the “Lettre Ulysses Award for the Art of Reportage” since 2003.

Svetlana Alexievich is considered one of the greatest journalists of the 20th century. The books that she wrote express both the suffering of the people as well as their courage through oral history.

Svetlana Alexievich had to leave Belorussia because of mounting persecution during the authoritarian regime of Alexander Lukashenko, the first President of Belarus in 1994. She lived in exile in Europe through International Cities of Refuge Network. She returned to Minsk in 2011.