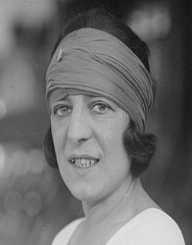 Suzanne Lenglen is regarded in sports history as one of the greatest tennis players not only as a female athlete but in the general aspect of the sport. Although her career was short-lived, she made her mark in history for winning a number of prestigious records, flamboyant yet graceful playing style, and record-breaking performances. Lenglen owns an impressive record of losing only seven matches in the entirety of her tennis career.

Jean Tillier was Suzanne Lenglen's known lover during her retirement from competitive tennis in the late 1920s. Tillier also helped Lenglen set up her tennis school in Paris. He provided financial assistance for his retired lover whereas the school expanded in due time and was legally recognized in 1936 by the French Tennis Confederation as a federal training center.

Born as Suzanne Rachel Flore Lenglen in Compiègne, Paris on May 24, 1899, she was a sickly child and had a bad case of chronic asthma. To make up for her frail composure, her father, Charles Lenglen, trained her in tennis to gain endurance and strength. She had her first match at the age of 11 in a family court held in Marest-sur-Matz in 1910 where the young Lenglen found great joy in the sport.

Seeing her daughter with ignited passion towards the sport, Charles Lenglen continued to train Suzanne Lenglen, and in no time she was already playing on a regular basis at various sporting events. She played in the 1914 French Championships as a finalist at age 14 and lost the match to Marguerite Broquedis, the reigning champion.

She started drawing attention not only to the sport but to herself as well when she became the youngest winner of the World Hard Court Championship at the age of 15 in the event held in Saint Cloud. Sporting tournaments and other festivities were put on hold when World War I broke out which put Lenglen on hold until 1919 when Wimbledon resumed its sporting event.

Suzanne Lenglen made her debut at the said event in front of 8,000 spectators of which among the attendees were Queen Mary and King George V. She played against Dorothea Chambers in the finals with Lenglen hailed as the victor by the end of the match making it one of the most memorable events in tennis history. Ever since then, she managed to defend the championship title in the singles division from 1919 until 1925 except 1924. She was also the forerunner in Women's Singles at the 1920 Summer Olympics held in Antwerp, Belgium.

Suzanne Lenglen's exit to the sporting industry is as abrupt as the decline of her health condition. Already having a medical history of asthma, she was diagnosed with Leukemia in June 1938 which rendered her blind three weeks later. Her representatives informed the French media that her condition is turning for the worse and have been suffering from extreme fatigue only to die a few days later on July 4, 1938, due to pernicious anemia.

The sudden end of the tennis sensation shocked the world. Besides her graceful play, the world also remembered her as a flamboyant trendsetter during her time. At her Wimbledon debut in 1919, she drew attention when she entered the court in an outfit exposing her forearms as opposed to the conservative attire of other players at the time.

In honor of her contribution to the sporting industry, the trophy awarded to the winner at the French Open's Women's Singles is named under her: the Coupe Suzanne Lenglen. She is also inducted in 1978 at the International Tennis Hall of Fame.