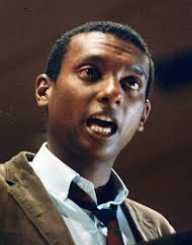 A prominent civil rights activist Stokely Carmichael, a Trinidadian-American, was born on June 29, 1941, in Port of Spain, Trinidad, and Tobago. His father Adolphus was a professional carpenter, and a part-time taxi driver and his mother Mabel was engaged as a stewardess in a steamship line.

His parents immigrated to the United States for a better future leaving their 2-year-old child in the custody of his grandmother and two aunts. Carmichael studied at the local Tranquility School before reuniting with his parents in Harlem, New York, in 1952 at the age of 11.

Later, his family moved to Van Nest, East Bronx, an old neighborhood with a predominant residence of Italian and Jewish immigrants and their successors. In 1960, he obtained his high school graduation from Bronx High School of Science, New York and proceeded to study at the Howard University, Washington D.C. He completed his graduation in 1964 with a degree in philosophy.

During his senior year in high school, Stokely Carmichael saw TV footages of a sit-in agitation of Black students. He was immensely moved after seeing the plight of those Black students and was immediately drawn towards joining the civil rights movements involving the Black populace of his adopted country.

Later, while at his freshman year at Howard, he joined the Student Nonviolent Coordinating Committee (SNCC), a frontal organization fighting for the cause of civil rights in America and Nonviolent Action Group (NAG), a Howard campus associate of the organization.

His involvement with the civil rights movement gradually became more intense with his active participation in picketing the likes of Woolworth's store and various sit-in protests in venues spread across Virginia and South Carolina. In 1961, while still in his freshman year, he participated in his first Freedom Ride, a movement organized by the Congress of Racial Equality (CORE) in the form of integrated bus travel down South to protest discrimination in interstate buses. During the period of this ‘Freedom Ride,’ he was arrested in Jackson, Mississippi for breaking the prohibition of entering a bus stop waiting room earmarked for ‘whites only.’

Stokely Carmichael was subsequently jailed for 49 days. His no-nonsense, hard-nosed attitude coupled with his flair for a witty response during his jail term soon catapulted him to infamy.

Carmichael’s journey along the road of the civil rights movement continued unabated in spite of his arrest and the subsequent jail term. He continued his participation in all forms of this movement and again participated in another such freedom ride in Maryland.

Stokely Carmichael was also seen actively involved in a demonstration in Georgia and a hospital strike in New York. Upon completion of his graduation in 1964, Carmichael became a full-time activist for SNCC and began working as a field organizer in the Mississippi region. Working with the grass root African-Americans, he led an aggressive campaign for the inclusion of the Black populace in the voter list in the predominantly racist southern region of the United States.

His successful campaign coupled with his natural leadership ability, rhetorical skill, and his robust and charming personality made him an able field organizer in Lowndes County, Alabama, a region mostly inhabited by the Africans-Americans.

In 1965, he formed a political organization ‘Lowndes County Freedom Organization’ and selected ‘Black Panther’ as its official logo. In 1966, he was elected as the chairman of the SNCC.

Stokely Carmichael was following the path of nonviolence and the philosophies propagated by Dr. Martin Luther King Jr. until 1966. However, the almost stagnant progression of the desired objectives of their movement repeated physical suffering at the hands of violent White police officers and the resultant humiliation thereof gradually made him disillusioned about the effectiveness of the method of nonviolence.

Carmichael eventually veered towards the violent forms of agitation and talked about ‘Black Power.’ In 1967, he left the chairmanship of SNCC and assumed the Prime Ministership of the more radical ‘Black Panthers’ after having undertaken a journey of North Vietnam, Cuba, Guinea, and China to meet the rebellious leaders of these countries.

Stokely Carmichael then engaged himself in touring and lecturing around the country and writing articles on the subject of pan-Africanism, Black separatism, and Black Nationalism. In 1969, he left the United States and took up permanent residence in Conakry, Guinea. He also changed his name to Kwame Ture to please both the President of Ghana and Guinea.

Stokely Carmichael married fellow civil rights activist and South African singer Miriam Makeba in 1968. The marriage culminated into divorce. He tied the nuptial knot again in 1980. His second wife Marlyatou Barry was a doctor by profession and was from Guinea.

They together had a son named Bokar Carmichael. The marriage ended in divorce after two years. He died on November 15, 1998, after suffering from prostate cancer.