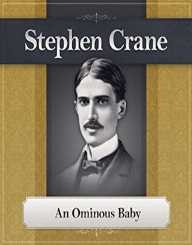 American writer Stephen Crane was born on the 1 November 1971 into a religious family in Newark, New Jersey. His father, Jonathan Townley Crane, was a Methodist minister and his mother, Mary Helen Peck, was a religious woman who wrote articles relating to social and religious issues. His mother was also involved in the Woman’s Christian Temperance Union. Crane was the last of fourteen children born to the couple. At a young age, he began writing, and two of his brothers were journalists.

He was a pupil at the Hudson River Institute (1888) and also enrolled at Claverack College, a military school. He then attended Syracuse University but dropped out in 1891 before obtaining his degree. An indifferent student, he was more interested in sport and observing the real world than his studies.

While still at college, he began writing freelance articles which were published via his brother’s news service. After leaving university, he got a job as a journalist with his brother and also submitted work to the New York Tribune. His first novel Maggie was privately published in 1883. Various publishers had rejected the manuscript because they felt that the descriptions of slum life were too graphic and disturbing for their readers. Critics, however, applauded the novel, seeing it as a significant step towards literary naturalism and realism in American literature. Initially, Maggie was not a commercial success. Taking into account publishers concerns, the novella was toned down and republished in 1896 and this second publication brought both critical and commercial success.

Crane’s next work was The Red Badge of Courage first appeared in December 1894 in various newspapers. Then in October 1895, Appleton published the book. The Red Badge of Courage is a novel about the American Civil War and became a bestseller in both the United States and England and is considered a classic in American literature. Other works by Crane include dozens of short stories, including The Blue Hotel and The Bride Comes to the Yellow Sky.

Crane also published two books of poetry The Black Riders, and Other Lines (1895).  His novels include:  The Third Violet, a story about struggling artists in New York City did not find the success of his previous work and With Active Service (1899) a war novel influenced by his experiences covering the Greek-Turkish war.  Working as a correspondent for the Bacheller-Johnson syndicate, Crane went to Florida where he covered the insurrection in Cuba against Spain (November 1896).

He was sailing for Cuba onboard the Commodore when it was sunk off Jacksonville. He spent time surviving in a lifeboat and later wrote a short story, The Open Boat, based on the experience. He was sent to Greece as a war correspondent in 1897 after which he settled in England. By this stage, his had contracted tuberculosis and was in poor health while at the same time in financial difficulties. His novella, The Monster, was published in Harper’s Magazine in late 1898.

His de facto wife was Cora Taylor who was running the Hotel de Dream when they met in 1897. She later accompanied him to England where they mixed with the literati of the day including Henry James and H.G. Wells. A collection of his letters was published in 1988. Crane contracted tuberculosis and was seeking treatment in a sanitarium in the Black Forest area of Germany when he died on the 5 June 1900. He was 28 years of age.