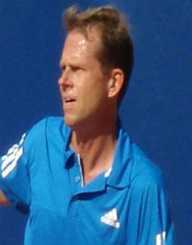 Stefan Bengt Edberg was born in 1966 in Sweden. Already in early childhood, his parents noticed he was talented in tennis. Therefore they sent him to a professional tennis trainer. In 1983 he participated in Grand Slam and won all the junior titles. The same year he also got his first win in doubles in Basel. In 1983, during the US Open tournament, he made a false serve, which hit a linesman Dick Wertheim. This hit killed Dick Wertheim.

After a quick and very successful start of the career in 1983, Stefan Bengt Edberg continued just as good in 1984. He won the tennis tournament in the Summer Olympics of 1984. There he played with Anders Järryd, with whom later they played doubles and became the worlds No.1 in doubles in 1986.

In the period from 1983-1993, Edberg was winning nearly every tournament he entered. In 1985 he won the US Indoor, Australian Open singles. In 1987 he won the Australian Open and US Open men’s doubles. He played the doubles with Anders Järryd.

Edberg had reached the final game in Wimbledon three times in a row. The first one was in 1988. This was a very successful year for Edberg, but he was no longer Sweden’s first racket, as Mats Wilander overtook the title that year.

In 1989 Stefan Bengt Edberg lost the final in the French Open to a seventeen-year-old player Michael Chang. Michael then became the youngest to win a Grand Slam title, and this in order became the only Grand Slam that Edberg did not win.

Stefan Bengt Edberg had an abdominal muscle injury in 1990. This made him quit the Australian Open final game during the third set against Ivan Lendl. Later the same year he did win Lendl in another tournament in Cincinnati and regained his Worlds No.1 title.

The last time Edberg appeared playing singles in Grand Slam was in 1993, in Australian Open.

Stefan Bengt Edberg is described as one of the best serve-and-volley players. He has a very dominating serve, but mostly it is not too overpowering. By making his serve not too strong, he gains time after the serve to get to the net and there plays from there. This serving style then benefits his serve-and-volley style. He has an excellent backhand, which is called the most effective and best of his era.

After retiring from tennis, Edberg started playing squash and soon was noted as one of the best squash players in Sweden. Later he also tried racketlon and also proved to be very good, because of the skills he developed by playing tennis and squash.

Stefan Bengt Edberg joined the Black Rock Tour of Champions in 2008. This is a tour for players who have retired from professionally playing tennis.

Edberg started coaching Roger Federer in 2013. Even though Federer sees Edberg less as a coach, but more like a mentor, they work well together, and Federer has since then very much developed his serve-and-volley technique.

Stefan Bengt Edberg is married. Together with his wife Annette Hjort Olsen, they have two children: one daughter and one son. Interestingly, before Annette married Edberg, she had had a relationship with one of Edberg’s opponents, Mats Wilander.