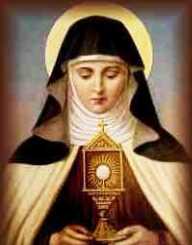 St Clare of Assisi was an Italian nun.

Chiara Offreduccio was born on July 16, 1194, in the town of Assisi, Italy. Her father, Favorino, was a wealthy man who owned several castles and palaces. Her mother, Ortolana, was a woman of noble origins. She was a pious woman who passed her devotion to religion onto her children.

St. Clare of Assisi started praying regularly during her childhood. At the age of 18, she first heard friar Francis preach at the San Giorgio church. She soon left her home and met up with him at the Porziuncula church. There, he cut her hair and gave her plain clothes.

He then placed her in San Paulo, a convent of Benedictine nuns. Her father came looking for her, with the intent to marry her off. She refused to return home, stating that she had devoted her life to Jesus Christ. She then moved to the San Angelo convent in Panzo.

Soon after that, Francis moved St Clare of Assisi and several other nuns to the monastery in the San Damiano church. By 1216, Clare became the official leader of the convent. Her group soon became known as the Order of Poor Ladies of San Damiano. They accepted the Rule of Saint Francis and vowed to a life of poverty and seclusion. Clare’s mother, Ortolana, joined the convent after her husband’s death. Her sister Catarina also joined, taking the name Agnes.

St Clare of Assisi passed away on August 11, 1253, at the age of 59. She was initially buried in the San Giorgio church. In 1255, Pope Alexander IV officially declared her a saint. In 1260, the construction of the Basilica of Saint Clare was finally completed, and her remains were transferred there. Three years later, Pope Urban IV renamed the Order of Poor Ladies of San Damiano to the Order of Saint Clare.

In 1255, St Clare’s feast day was assigned for celebration on August 12, the day after her death. In 1958, Pope Pius XII declared Clare the patron saint of television.

The reason for this was the fact that she could supposedly hear and see Mass on the walls of her room. In 1969, her feast day was moved to August 11, the day of her death. In 2016, composer Peter Reulein composed the oratorio Laudato si, featuring Clare as one of the five main characters.

There are several towns, cities, municipalities, counties, churches, convents, rivers, hospitals, schools, and sports clubs named after Clare. They include the variations Santa Clara, Santa Chiara, Saint Clare, and Saint Clair. Most of them are located in the United States and South America. There are also a few in Europe, Africa, and Asia.