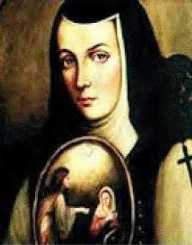 Juana Ines de la Cruz was born on November 12, 1648. She was a Spanish Hieronymite nun. She was also a philosopher, poet, and a self-taught scholar. She died at the age of Forty Six years old.

Juana Ines de la Cruz was born Juana Ines de Asbaje y Ramirez de Santillana on November 12, 1648, in San Miguel Nepantla in New Spain, Spanish Empire. She was born to Pedro Manuel de Asbaje and Isabel Ramirez. In 1651, she was baptized. She was brought up in Amecameca. She was speaking to the Hacienda chapel to read the books her grandfather had. She later knew how to write and read Latin.

In 1653, she could do accounting. In 1656, she composed a poem. She later learnt and mastered Greek. In 1661, she started teaching young children Latin. She later learnt and wrote some poem in Aztec a Nahuatl language. In 1664, she went to Mexico City. She later became the Viceroy’s Court Lady in waiting. In 1667, she became a postulant at the St. Joseph’s Monastery.

In 1669, Juana Ines de la Cruz joined the Hieronymite nuns’ Monastery. She later became a nun. She was later cloistered in the Santa Paula Hieronymite Covenant in Mexico City where she stayed till she met her death. She was engaged in writings and paintings. Some of her works included ‘The Dream,’ the comedies ‘Pawns of a House’ and ‘Love is More Labyrinth.’ In 1683, her work ‘Pawns of a House’ as performed during the Viceroy Count of Parades’ first son’s birth celebration. In 1689, her other work ‘Love is More Labyrinth’ was used in the Viceroyalty Gaspar de la Cerda y Mendoza’s Inauguration. In 1693, she quit her writing.

Juan Ines de la Cruz did not get married because she was a nun. She died on April 17, 1695, in Mexico City, New Spain, the Spanish Empire. She died at the age of Forty six years old.