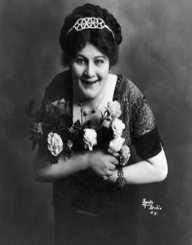 Sophie Tucker was born on 13th January 1887, in Podolia Governate, in the Russian Empire. Her parents were Jewish migrants heading to the United States. They settled in Connecticut and opened a restaurant.

Sophie Tucker sang in her parents’ restaurant to earn money for herself as a youngster. She would serve the customers and sing in between.

In 1903, Sophie Tucker eloped with Louis Tuck. He was a beer cart driver, and she was just 16. Upon returning after the elopement, her parents organized an Orthodox wedding for the young couple.

In 1906, Sophie Tucker had a son, Albert. Shortly after, the couple separated, although they didn’t divorce until 1913. After separating from her husband, Sophie Tucker moved to New York. She left Albert with her, Annie.

Sophie Tucker had a letter of introduction to Harold Von Tilzer who worked in New York as a composer and producer of theater. The letter was not successful in gaining employment, so Tucker took ad hoc work in cafes as a singer, living on tips from the customers.

Sophie Tucker found her way to the theater and debuted in her first stage performance in 1907. She performed regularly, but the producers made her wear “blackface” as they didn’t think she was pretty enough.

In 1908 she joined a burlesque show performing in Pittsburgh. Later that year while touring, her makeup kit got lost, and she had to go on stage without the blackface makeup. The crowd was astonished when she told them she was white, not black, and that she wasn’t a Southern girl, but a Jewish girl.

In 1909, Sophie Tucker joined the Ziegfeld Follies, but the other performers refused to share the spotlight with her, jealous of her popularity. The company couldn’t keep her on.

In 1911, Sophie Tucker released a single, Some of These Days, which was written by Shelton Brooks. She continued to perform through the years, and in 1921, she hired Ted Shapiro as her musical accompanist and director. He became her pianist, as well as writing songs for her, and stayed with Sophie Tucker throughout her career. When the two performed, they would also swap wisecracking small talk, much to the delight of the audiences.

Sophie Tucker’s popularity continued through the 1920s. One of her most famous songs, My YiddisheMomme, was recorded in 1925.

She had become successful in Europe by the 1920s, and she toured England, performing for King George V in 1926. As vaudeville declined, Sophie Tucker turned to radio and movies to extend her career. Her movie debut was in 1929, in the movie, Honky Tonk.

She continued performing into the 1930s and was billed as “The Last of the Red Hot Mamas.” During 1938 and 1939, she ran her own radio show, The Roi Tan Program with Sophie Tucker. It was a 15-minute broadcast, three times per week. She also appeared as a guest on other programs including The Andrews Sisters and The Radio Hall of Fame.

Through the 1950s, Sophie Tucker made regular appearances on different variety and talk shows such as The Ed Sullivan Show and The Tonight Show.

Sophie Tucker never retired, continuing to perform for the rest of her life.

Sophie Tucker had two compilation albums, and in 1937 released.

Sophie Tucker’s second marriage was in 1917, to Frank Westphal. He was her accompanist at the time, but the couple divorced in 1920.

Her third marriage was in 1928 to Al Lackey. Lackey was her manager, but the couple divorced in 1934.