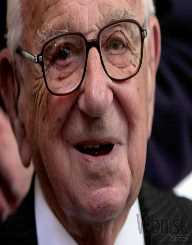 Sir Nicholas George Winton, a gallant soul, was born on 19th May 1909. He is to date one of the greatest humanitarians ever to walk the surface of the earth. He is famous for the sole initiation and execution of the rescue mission that saw 699 Jewish children free from effects of the Great War.

His operation is known as Czech Kindertransport and the children identified as ‘Winton Children.' Also, he managed to arrange for their transport and living arrangements back in Britain. His efforts did not get recognition until the 80’s. The year 2003, saw him receiving his Knighthood. He died on July 1st, 2015.

May 19th, 1909 saw the birth of Nicholas George Wertheimer in London, England. He was the eldest of the three children to Rudolf and Barbra Wertheimer who were German Jews. His parents later converted to Christianity and changed their Family name to Winton. The family lived an affluent life as the father was a prosperous banker at the time.

After his graduation from the Stowe School in Buckingham, Nicholas Winton decided to go into banking as well. He followed through the internship from his father in international banking. After the completion of his placement, he started some jobs in London, Paris, and Berlin. By the year 1931, he found his way back to England and worked there as a stockbroker.

Sometime during his visit to the German-controlled Sudetenland in Czechoslovakia, Nicholas Winton managed to see firsthand the many horrors of the persecutions. He was there to see a friend after skipping out on a skiing trip in December of 1938. The situation at the refugee camp was terrible, and the camp was thronging with Jewish families and political prisoners.

During this period there was a plan in place to see the Jewish people out of these camps and sent to other countries like Germany and Austria. Czechoslovakia was not in the immediate plan. He moved on his own to start the rescue process although he did not have the group’s permission to do so at the time. He decided to use the British Committee for Refugee’s name and started receiving applications from the parents of Czech children at the Prague Hotel.

Upon the completion of his application work in Czech, Nicholas Winton decided to go back to England to find and prepare living conditions for the refugees. In England, many people were receptive to the idea, and they agreed to help. He also secured traveling documents for the children. Besides, he covered the remaining cost of the papers from his pocket.

The End of the Operation

Adolf Hitler and his Nazi German army took the full control of Czechoslovakia on March 14th, 1939. The rescue operation was so lucky that the first train carrying the children left the country only hours before the Nazis could establish themselves all over the country. Winton managed to conduct seven more operations after that.

This effort yielded the freedom of 669 children out of German-occupied Czechoslovakia. However, 250 children never left the station in the 9th train. Hitler decided to go on the offensive and invade Poland. This brought all the activities of the rescue operations to a halt as all the borders were closed.

Having accomplished this great stride in life, not many knew of Nicholas Winton’s role in the matter. He decided to keep the word mostly to himself and not to let it out to even his wife, Grete. She decided to take the scrapbook and letters she had found to the Holocaust historian.

This move opened the eyes of the world to Winton’s deeds. Recognitions and appreciations followed from everywhere around the globe. He was ordained the British Oskar Shidler after the German man who saw to the rescue of 1200 Jews from persecution. The Queen of England appointed him a Member of the Order of the British Empire in 1983.

Nicholas Winton was also knighted in recognition of his work in the Czechoslovakia Kindertransport in 2003. In the same year, he received the Pride of Britain Award for Lifetime Achievement. The British Hero of the Holocaust was also an honor by the British Government.

Nicholas Winton took work with International Bank for Reconstruction and Development in Paris. Grete Gjelstrup met with him during this period. She was at the time working as a secretary. The year 1948 gave rise to wedding bells in their honor on the 31st March. Winton and his wife Grete were blessed with three children, namely Nick, Barbra, and the last-born Robin.

Robin was born with Down syndrome and died just one day before his sixth birthday from meningitis. They were staying at their home in Maidenhead home in England.

The morning of 1st July 2015 brought the somber news of Sir Nicholas Winton’s death. He died at Wexham Park Hospital in Slough due to cardio-respiratory failure. He was 106 years old at the time of his death.