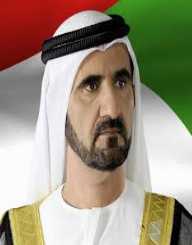 Sheikh Mohammed bin Rashid al Maktoum is the Prime Minister and the Vice President of the United Arab Emirates, as well as the Ruler of the Emirate of Dubai.

Sheikh Mohammed started his education with private tutors, who taught him Islamic and Arabic studies. At the age of 6, he became a pupil at the Al Ahmedia School. He continued at the Al Shaab School and the Dubai Secondary School. In 1966, he moved to the United Kingdom, where he studied at the Bell Educational Trust English Language School. He continued at the Mons Officer Cadet School and he was trained as a pilot in Italy.

In 1971, the Trucial States were abolished and the United Arab Emirates were formed. That same year, Sheikh Mohammed became the country’s Minister of Defense. He was also the head of the Dubai Police Force and the Union Defense Force. In 2006, his older brother Maktoum bin Rashid al Maktoum died. Sheikh Mohammed immediately took the spot as the Ruler of Dubai. He also soon became the Vice President and the Prime Minister of the country. He began making reforms in the government’s organization and strategic planning. He also tried to decrease the corruption.

Sheikh Mohammed owns the companies Dubai World and Dubai Holding. He has investments and real estate in countries all over the globe. He helped launch the Emirates Airline, Dubai Internet City and TECOM. He worked on the development of the Dubai International Airport, the Dubai Ports World, the Burj Al Arab, the BurjKhalifa, the Palm Islands, and the Jumeirah Beach Hotel. He is involved with horse racing and he organizes the Dubai World Cup. He owns stables in the U. K. and in the U. S.

Sheikh Mohammed created a charitable foundation called The Mohammed Bin Rashid Global Initiatives. It encompasses dozens of smaller entities and thousands of programs in over a hundred countries around the world. He has sent donations to war victims in Palestine and Afghanistan.

In 1979, Sheikh Mohammed married his first cousin, Hind bint Maktoum bin Juma al Maktoum. She became his senior wife. After her, he married at least five more women. His most prominent wife is Hayabint Al Hussein, the daughter of the king of Jordan. He has a total of 23 children, including fourteen daughters and nine sons.