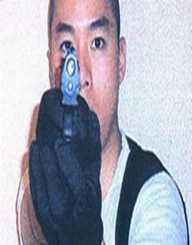 The student responsible for the 2007 Virginia Tech killings Seung-Hui Cho was born on the 18 January 1984 in Onyang-dong, South Korea. His parents were Kim Hyang-im and Seung-Tae Cho. He had two siblings.
When he was eight years old, his family emigrated to the United States.

Seung-Hui Cho was a pupil at Poplar Tree Elementary School, Chantilly. A small community school located in Fairfax County, Virginia. He was a good student who excelled in mathematics and English, finishing a three-year course in eighteen months. He displayed no problems during his time at Poplar Tree Elementary School and was seen as a good student who was quite popular, remembered for being well-dressed and clever.

Seung-Hui Cho was diagnosed with mutism, having shown symptoms of severe anxiety and depression as well as problems with speech. He was treated as a special education student and classified under the emotional disturbance criteria. The classification meant the Cho did not have to take part in certain class activities including oral presentations. There were reports that he was bullied at school and in his junior year, he refused to continue with therapy.

When Seung-Hui Cho was in the eighth grade, the Columbine High School massacre occurred (1999), and he showed an intense interest in the tragedy. He commented on a school assignment about wanting to repeat Columbine, and the incident was reported to his parents. His parents, in turn, took him to see a psychiatrist.

He graduated from Westfield High School in 2003.

Seung-Hui Cho began at Virginia Tech as a business information systems major. During his first year, he had difficulties with his roommate and changed rooms. In early 2005 he applied to change his course to major in English.

Sometime after this, his family believed that a rejection slip sent by a New York publishing house triggered a depressive episode. By autumn/fall of 2005, Seung-Hui Cho’s family were concerned about his depression and the fact that he was not writing home regularly. One of his professors, Nikki Giovanni, was worried about the level of violence showing up in his writing. She also noticed that he was surreptitiously taking photographs in the classroom and she asked him to cease doing so. Giovanni then arranged for Seung-Hui Cho to removed from her class and for the chair of the English department, Lucinda Roy, to tutor him one-on-one. Counseling was recommended for Seung-Hui Cho, but he refused to go. Roy then advised the university authorities as well as Virginia Tech police. Seung-Hui Cho’s problems were also referred to the university’s care team.

In November 2005 university authorities received more than one report from female students regarding inappropriate behavior. Cho’s behavior including unwanted contact via the internet, telephone, and face to face interaction. In December Virginia Tech police issued a warning to Seung-Hui Cho and told him to stop contact with a female student who had formally complained about his behavior. Seung-Hui Cho responded by sending a student a message indicating that he was suicidal. A warning was issued by a community service officer who felt that Seung-Hui Cho was a danger to himself and others.

Beginning at 7.15 am on the morning of the 16 April 2007, Seung-Hui Cho began a murderous rampage that resulted in the deaths of 32 people. The first shooting to place at West Ambler Johnston Hall, a co-ed dormitory close to his dorm. He shot and killed two people before returning to his dorm room. Because authorities believed that the first killing had been a domestic dispute, they did not close down the campus. Two hours later, the second shooting took place at Norris Hall, an engineering classroom building across campus. In this second incident, Seung-Hui Cho killed a further thirty people, then turned the gun on himself. Between the shootings, he emailed a video confession to a news outlet. He also left a long and rambling suicide note in his dorm room at Virginia Tech.

At the time of the Virginia Tech shooting, the killings broke the record for a mass shooting on an American college campus. The previous record was when Charles Whitman killed 16 and injured 31 at the University of Texas at Austin on the 1 August 1966. The Virginia Tech Massacre is considered one of 13 most deadly shootings in America. Seung-Hui Cho killed 32 people and injured 17; his victims included students and faculty staff.

In 2013 the Virginia supreme court ruled that Virginia Tech’s warnings to student over Seung-Hui Cho’s mass killings were not negligent. The ruling was in response to a wrongful-death lawsuit brought on behalf of two students who were killed in the incident, Julia Pryde and Erin Peterson. The families of the two deceased had sought damages of $10 million. They believed that a campus-wide alert on the morning of the 16 April 2007 might have saved lives. The supreme court ruling over-ruled a lower court decision which had agreed that the delay was negligent and who had awarded the families $4 million each.