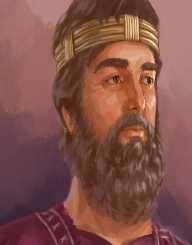 According to the account of the Hebrew Bible, Saul was the first king of the kingdom of Israel and Judah. He was born around 1076 BCE in a place called Gibeah. His father’s name was Kish, a member of the Benjamin tribe. Kish came from the family of Matrites and the tribe of Benjamin was among the twelve tribes of ancient Israel. The biblical account of Saul’s life as described in the Books of Samuel states that Prophet Samuel selected Saul as the King of Israel and anointed him as well.

There are three different accounts of Saul being anointed as the King of Israel in the book itself. Among these three versions, French historian André Lemaire gives credence to the theory of public ovation. According to this theory, Saul unified the tribes of Israel under siege by Ammonites, one of Israel’s arch-enemy. Saul led from the front and defeated the Ammonites. People of Israel overwhelmingly acclaimed Saul as their King. Thus, Prophet Samuel anointed Saul as the King of Israel on the basis of popular public support.

THE REIGN OF SAUL

Saul ruled Israel for around 20 years (1020-1000 BCE). He was a brave man who fought triumphantly over Israel’s arch-rivals such as Philistines, Ammonites, Amalekites, and Moabites. In the process, he successfully extended the frontiers of his kingdom. He also integrated a number of tribes of Israel into a close-knit entity.

The first sign of discord between Saul and Samuel happened when Saul offered a sacrifice to god. Samuel thought it to be undermining his authority. This act of Saul enraged him enormously. Hence, in a fit of rage, Samuel declared that Saul would not be continued as the King of Israel. Soon, a second disagreement between the two took place. After defeating the Amalekites, Saul kept the plunder with him and allowed their king Agag to go unharmed. This time, Samuel publicly dethroned Saul.

After his dethronement, Saul fell into a state of nervous disorder. He became moody and ill-tempered. Under such a depressive state of mind, Saul attacked David, a young boy brought to his household to entertain him by playing music. Saul’s melancholic state of mind made him attack David repeatedly on some pretext or the other. David, on the other hand, could not tolerate such ill-treatment for long. As a result, he became a fugitive. After the departure of David, Saul felt more helpless. By that time Samuel was also dead.

At that crucial juncture, Israel’s arch-enemy Philistines attacked again. Saul fought tooth and nail with the invaders. However, a sustained attack routed Saul’s army completely. The Philistines executed three sons of Saul. In an ongoing fierce battle against the Philistines, Saul fell on to his sword and thus got killed. According to a popular version, Saul did so intentionally to avoid capture in the hands of the Philistines. The People of the war-ravaged region still had faith and respect for their king. In spite of the threat to their lives, they sneaked into the battlefield, saved the dead body of Saul, transport it back and gave it a respectful last rite.