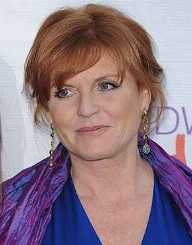 Sarah Ferguson aka Fergie was once a husband to Prince Andrew, a relationship that lasted for a decade. Other than that she has made a name for herself. She is an incredible writer and has also majored in film production. Sarah’s name is still a talking point across the globe. She has tried all means of entry to gain access to his former lover, Prince Andrew.

Sarah Ferguson has proved that she can stand on her two feet and show to others that she’s stronger than them. She is a self-supporting agent who is not bothered with inspiration, guidance or any other people’s insights. She loves progress as well as being surrounded by intelligent traits.

Her personal life is not left behind either; she forever prays for an understanding and supportive partner. She does not have a problem when it comes to attracting perfect partners, but staying in a relationship for years and years seems like a boredom journey.

If her freedom is tasted in any way, then get ready to read her great mood swings on her forehead. Compromise is something that shouldn’t be a problem to this woman. She prefers to have one loyal friend than having ten to a hundred cosmetic fellows.

It was on October 15, 1959, that Sarah Margaret Ferguson was born in England London. She is the second daughter to Susan Barrantes and Ronald Ferguson. Sarah was lucky to have a rich English background. She joined private schools and later turned into a competent horseback rider.

Ronald Ferguson served as a manager of Prince of Wale’s polo club. Good relation with the royals made Sarah to be known by them at an early age. At 13 years of age, her parents parted way. Sarah surpassed all and graduated from a local secretarial college. She was glad to attain a job in a public relation firm, publishing company as well as at an art gallery.

It was not that long when Sarah Ferguson met with Prince Andrew. They met in 1985 and married the following year. The duo was blessed with two children, Eugenie and Beatrice. While serving as Duchess of York, the media nicknamed her as Fergie. Not once was she criticized for her spendthrift nature as well as outspoken nature.

Prince Andrew was usually away playing his royalty role in the Royal Navy. In 1992 the duo parted ways when they officially divorced in 1996. Still, in the 1990s, Sarah launched her talk show. She has also done several commercials for Weight Watchers.