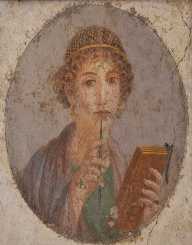 Sappho was one of ancient Greece’ most celebrated female poets. Her unique poetic style and devotion to the empowerment of women made her both a scholar and social reformist.

The life of this poetic giant is woven in fact, legend and mythical narrations. The exact years of her existence are in doubt. Most scholarly school of thought put her year of birth between 640 BC and 610 BC. She was believed to have died after about fifty or more years later.

Sappho was born in Mytilene on the Greek island of Lesbos. She was the daughter of a wealthy father of noble lineage. She was raised and educated in Lesbos’ capital Mytilene. Most historians believe she had two brothers. The brothers were Larichus and the other Charaxus.

Sappho was married once in her life to Cercylas and had a daughter Cleis. Her husband was a well of an aristocrat from another Greek island of Andros. Despite the marriage narrative, Sappho was reported to have had a peculiar glorification women romance. Whether it was her individual preference or the normal tendency of the society then is hard to prove.

Lesbian, a term used to describe a woman who has sexual attractions to another woman was derived from the name of her home island Lesbos. Other ancient narratives say that during her life, the Greek society was rife with same-sex romance. This was even more prevalent within the nobility circles.

Her death is shrouded in an even unclear legend. Sappho was reported to have committed suicide. She was in love with a young man Phaon, who took little notice of her. She threw herself from a cliff in response to the rejection of her feelings by a young sailor in Lesbos. This supposedly happened between the year 570 and 550 BC.

Sappho had a unique composition style in her poetry. She often used three long lines and ended her stanza with two or other three short sentences. This was a deviation from the traditional Greek style that as more classical and oratory in nature. Her style was then classified by the term Sapphic. All other variations of her students were subjected to the Sapphic meter to gauge their content.

Some believe that she headed a school in her hometown. Sappho was a devotee of Aphrodite. Aphrodite was the Greek deity of love and romance. Most of her writings were dedicated to the empowerment of the lives of women.

She quoted the women community numerous times in her work. They bordered everything from sex, marriage, finances, and politics. Most historians interpreted this to have been the educational blueprint of her women or girls academy.

Her poetic work was mostly in her Aeolic dialect of the Greek language that was native to Lesbos. Her unique poetic flow was musical. In most of the ancient Greek times, poets were would accompany their poems with the musical notes of lyre to educate and entertain the public.

Another aspect is the Greek society liked to meet in open public places for activities. To keep the attention of the crowds, poets educated the public with musical lyrics.

Sappho created a cult called Thiasos. This was a society of young women who dedicated their lives in the worship of Aphrodite, the deity of romance, sex, and love. Their distinct worship comprised of songs, dances, and poems in praise of Aphrodite. It was said the Hymn of Aphrodite was composed to honor the worship. These women are believed to have formed the bulk of her academy she headed.

Though she wrote many poems, most of them were either destroyed over time or not copied. Her work was also destroyed during the political strife that happened during her time. Her most famous work, The Hymn of Aphrodite was found in the museum in Alexandria. It was believed that her work had been stored for historical studies by Alexander the Great in the Egyptian city.

Her Aeolic dialect was considered difficult by other regions in Greece. This slowed the study and translation of her work into other Greek dialects. The patriarchal society in ancient Greece hindered Sappho’s work to be appreciated. Women were not considered competent scholars. Like most civilizations, it was the men who dictated the narrative of reported history.

Sappho was not acknowledged beyond her home island during her lifetime. But years later her fame rose, and more people took notice of her creative work. This is proved by the recognition in some of Plato’s manuscripts.