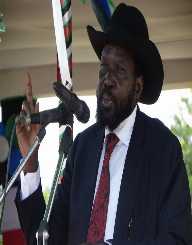 Salva Kiir Mayardit was born in 1951, in Bahr el Ghazal. He is the president of South Sudan as from 2011. This was after independence. The first Sudanese civil war led to his prominence in politics. His political quest was further improved through his involvement in the National Army and Southern Separatist Movement. During the second Sudanese Civil War he even proved his ability as a leader by remaining strong fighting for peace. He won the trust of the military, ‘Sudan People’s Liberation Army and Movement.’

His devotion marked the beginning of his political career where he later held high political positions. He also founded many political movements that were quite important. A good example is ‘Sudan People’s Liberation Movement.’ He participated in the agreement of the Comprehensive Peace Agreement, and the Independence of South Sudan. He survived two planned coups that aimed at overthrowing his government.

Little is known of Kiir’s early life. He was born on 13th September 1951. His family belonged to the ‘Dinka’ ethnicity.

His political career began with the first Sudanese civil war in 1952. Salva Kiir Mayardit participated actively through southern separatist movement. The war eventually ended in 1972 where he attained a position in ‘Sudanese National Army’ as the Lieutenant Colonel. He later left the National Army and together with Garang formed the ‘Sudan People’s Liberation Army and Movement.’- ‘SPLM’ and’ SPLA.’ This movement became a key rebel to Northern Sudan around 1983.  Kiir held the position of the deputy and commander of the ‘SPLA Council’

In July 2005, Salva Kiir Mayardit became the first vice president of the Sudanese National Government. This was after the launching of ‘Comprehensive Peace Agreement’ between South and North Sudan where Garang held the presidential position of the region. A month later Garang died in a helicopter accident, leaving Kiir to assume both roles.

Southern Sudan became fully independent on the 9th of July in 2011, with Kiir as the First president.

Salva Kiir Mayardit actively participated in the rebellions between Northern and Southern Sudan with the aim of ending the civil wars. The negotiations led to the formation of ‘Comprehensive Peace Agreement’ in 2005 which at last ended the Second Sudanese civil war.

His plans for South Sudan involved the building of alternative routes for oil transportation from the existing ones that had to pass through northern Sudan. This is to ensure Hostility from the North is avoided at all costs.

Salva Kiir Mayardit is believed to own shares in ABMC Thai-South Sudan Construction Company Limited. This company has been awarded an estimate of $161 million for government road contracts. Kiir was awarded an honorary degree in 2009 at a Kenya University.

Salva Kiir Mayardit wedded Mary Ayen Mayardit. They have two children, a son, Munuti Salva Kiir and a daughter Adut Mayardit. His wife is the founder of the contributor of Concern for Women and Children also known as CWC

George Bush, the former US president, issued him with 10-gallon black Stetson Cowboy hat as a gift. This was in 2006 during a visit to the white house. This hat has since then been his Trade Mark. Salva Kiir Mayardit wears it to all occasions.