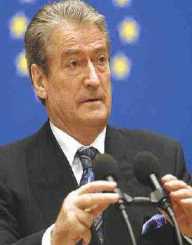 Sali Ram Berisha was born on 15 October 1944 in Vicidol, Tropoje District Kukes County in Albania, near the border with Kosovo. His father moved to Tropoje district since his grandfather had committed a crime leading the family to be targeted by the Berisha tribe.

Berisha went to study medicine at the University of Tirana and graduated in 1967. He then went to specialize in cardiology and was appointed as an assistant professor at his alma mater and worked as a cardiologist at the Tirana General Hospital. During this time, he became involved in politics, after joining a discussion forum for changes in the Albanian Party of Labor.

Berisha was slowly becoming one of the leading cardiologists in Albania, and during the 1970s, he became the leading researcher in the field. Berisha was appointed the professor of cardiology at the University of Tirana. In 1978, he received a fellowship from UNESCO for advanced study and training in Paris for nine months.

Berisha conducted a research program on hemodynamics, which attracted a lot of attention from another European specialist. In 1986, he was elected a member of the European Committee for Research on Medical Sciences, where he worked on scientific research strategies for “Health for All.”

In 1990, an interview for the Albanian Writers League newspaper Berisha demanded the abolition for barriers to freedom of thought and expression and asked for the right of all Albanians to travel freely within the country and abroad. He also asked Albania to abandon its isolationist foreign policy. He also urged the Albanian Party of Labor to abolish the communist constitution and recognize the Human Rights Charter, as well as to draft a new, democratic constitution and remove all monuments of Stalin in the country.

Later in 1990, Berisha published an article in the Bashkimi newspaper, condemning the cosmetic reforms of the Alia regime. He argued that there could not be true democracy in Albania. In December the same year, Berisha joined a series of student demonstrations that forced the government to approve a multi-party system. He emerged as the leader of the Democratic Party of Albania, which was the first and largest of the opposition parties in the country.

In 1992, the first free elections were held in Albania, and Berisha was elected the President, becoming the first non-Communist head of the state in 53 years. He began a series of political, economic, institutional and legislative reforms. Over the period from 1992 to 1996, complete privatization of land and residencies took place. Prices and exchange rates were liberalized, and Albania began an increasing economic rise. Albania was also opened towards West and became a member of the Council of Europe in 1995. In 1993 the Partnership for Peace Agreement established close cooperation with European Union and the United States.

Berisha introduced Islam to the political scene and pursued re-Islamisation of the country. Non-Governmental Organizations from Saudi Arabi and other Muslim countries were invited to build mosques and schools, as well as to provide other aid. However, in 1996 the Ponzi schemes collapsed, into which Albanians had allegedly invested $1 billion worth of savings. The crisis was recapped, and demonstrators took the streets accusing the government of stealing the money. The situation deteriorated quickly, culminating in the desertion of large part of the police and military. Berisha refused the opposition demands to step down, claiming that he has to ensure continuity for the UN and the European Multinational Forces to step in and take control of the situation. In July, Democratic Party lost the 1997 elections, and the socialist RexhepMeidani replaced Berisha.

In 2001, Berisha led the coalition of center-right parties in the general elections. The coalition won 37% of the votes, but Berisha led demonstrations demanding fresh elections. In 2004, he led a protest demanding prime minister Nano to resign. The following year, he led a coalition of five right-center parties into the 2005 parliament elections, winning the majority of 74 MPs and was appointed the Prime Minister of Albania.

In the 2009 elections, Democrats narrowly won the parliamentary elections, but he had to create an alliance with the Socialist Movement for Integration party. This was the first time since 1991 when a ruling party had to force a coalition through not winning enough seats on its own. Since the elections were flawed, the socialist opposition called for a recount of the ballots, which Berisha refused. The crisis between opposition continued to worsen, leading to Socialist abandoning parliamentary debates and staging hunger strikes to as for international support. The crisis was one of the reasons why Albania was refused an official candidate status for European Union in 2010.

As the prime minister, Berisha was supporting the LGBT rights and successfully adopted the anti-discrimination act, protecting Albania’s LGBT citizens. In 2013, he resigned as the Democratic Party leader but remained in the parliament.

Berisha married pediatrician Liri Berisha (Ramaj). She is the president of Albanian Children Foundation, which focuses on children with autism and Down syndrome. In 2008, she founded the Mother Teresa Cultural Foundation and the following year, received the Woman of the Year award from the Women’s Information Network.
Barisha and his wife have two children- ArgitaMalltezi and ShkelzenBerisha.