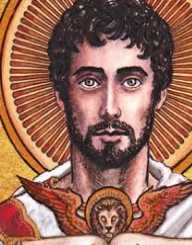 One of Christ’s original 12 disciples, Saint Mark was born in Cyrene, Libya. His date of birth is unknown. He is also referred to as one of the 70 Disciples of Christ entrusted to spread the message of Christ by Jesus himself. He is the traditional author of the Gospel Book of Mark. The world knows it as the second synoptic Gospel, The Book of Mark.

Growing up in the first century A.D. in the Middle East, he travelled to multiple places of the ancient world along with Saint Peter, another prominent disciple of Jesus Christ. They finally reached Rome, Italy, the epicenter of the religious activities of the Catholic Christians afterwards. Saint Mark used to record the sermons in writing delivered by Saint Peter in his speech addressed to the people gathered in many places of their journey. Mark later used some of these sermons while writing the second Gospel.

THE LIFE’S JOURNEY OF SAINT MARK

Saint Mark hailed from a religious family, his mother’s house in Jerusalem is the centre of Christian life immediately after Jesus's ascension to heaven. He accompanied his cousin Barnabas and Paul to Antioch (present-day Antakya, Southern Turkey). Mark served as the assistant of the duo during their mission journey.

However, once the three reached Perga, Turkey, Mark came back to Jerusalem, abandoning his journey. Mark rejoined Barnabas when the latter set sail to Cyprus. Barnabas and Paul separated before this development. Paul’s staunch opposition to giving another chance to Mark caused their separation.

One of the notable feats of Saint Mark was his tour to the ancient African country of Egypt. He was the first person to bring the Gospel message to the Dark Continent. He established a Coptic Orthodox Church in Egypt and became the first Bishop of the city of Alexandria. During his stay in Egypt, apart from his selfless service to the people, establishing several churches and the first Christian school was among his many distinguished achievements.

In the year 68 A.D., Pagans, infamous for their persecution of the Christians, took Saint Mark into their custody. They abused and tormented him physically. Saint Mark died on April 25, 68 A.D. in the custody of these Pagans. Sailors secretly extracted relics from his body and took them to Venice, Italy where St. Mark's Basilica was built in commemoration of his honor.

Saint Mark remained the patron saint of many different subjects. His symbol is the winged lion. He is regarded as the founder of Christianity in the continent of Africa. The second Gospel, authored by Mark, highlighted the significance of learning and applying the acquired knowledge of spirituality to the day to day life. He further described the voice of Saint John the Baptist as a lone voice crying out in the wilds like a roaring lion. The voice symbolizes the effort of Mark and John in delivering the message of Christ to ordinary people with absolute fearlessness.

Saint Mark was a witness to some miracles performed by Jesus Christ. In his Book of Gospels, he mentioned some of these miracles. In one such incident, Mark and his father Aristopolus encountered a lion couple while walking on the banks of the River Jordan. Mark chanted the name of Jesus and wished that the lions would not harm them in any way. It is said that immediately after his prayer, both the lions fell and died instantaneously.

In another incident, Mark healed a cut wound of a cobbler miraculously. In Alexandria, he visited a cobbler to mend his pair of shoes. While repairing the shoes, the cobbler accidentally injured his finger. Mark collected some clay, spit onto it, and applied it onto the cut wound of Anianus, the shoemaker. With the chanting of prayers in the name of Jesus urging him to heal the injury, the miracle of instant healing of the wound happened within no time. Rumours are that even the people who have reportedly prayed in the name of Mark after his death have got cured of their illnesses and injuries.