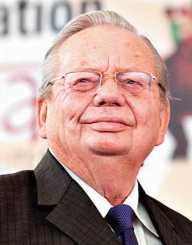 Ruskin Bond was born on May 19, 1934. He is an Indian author. He is well known for his role in promoting children’s literature in India. He is known to have written more than five hundred essays, short stories, and novels.

Ruskin Bond was born on May 19, 1934, in Kasauli, Punjab, India. He was born to Edith Clarke and Aubrey Bond. His father served in the Royal Air Force. His parents separated while he was still young. His father died when he was ten years old. He attended Bishop Cotton School in Shimla. He graduated from the school in 1950. He loved reading literature, and he was influenced and inspired by the works of Charles Dickens, Charlotte Bronte, and Rudyard Kipling among others. He started writing and won several competitions in school including the Irwin Divinity Prize and the Hailey Literature Prize. In 1951, he wrote his first short stories titled ‘Untouchable.’ He later travelled to the United Kingdom where he wrote his first novel ‘The Room on the Roof.’ The novel won him the John Llewellyn Rhys Prize.

Ruskin Bond started his career by working in a photo studio. He worked there while he was looking for publishers for his works. He started earning money for his writing, and he went back to India and settled in Dehradun. He earned a living by working as a freelance writer. He penned short stories for newspapers and magazines. He worked with papers such as ‘The Leader,’ ‘The Tribune’ and ‘The Pioneer’ among others. In 1980, he published his novel ‘The Blue Umbrella’ which became famous. His impressive writing captured the attention of Penguin Books who approached him to write a few books.

In 1993, the volume containing ‘Vagrants in the Valley’ and ‘The Room on the Roof’ was published by Penguin. His works ‘The Best of Ruskin Bond’, ‘The Night Train at Deoli,’ ‘Our Trees Still Grow in Dehra’ and ‘Time Stops at Shamli’ were also published over time. Some of his other works include ‘A Face in the Dark and other Hauntings,’ ‘A Season of Ghosts’ and ‘Ghost Stories from the Raj.’ He wrote different genres including essays, autobiographies, non-fiction romance, fiction and books for children.

Ruskin Bond has written more than five hundred short stories, novels, and essays. He has also authored more than fifty books for children. He has written two volumes of autobiography including, ‘The Lamp is Lit’ and ‘Scenes from a Writer’s Life.’ Some of his works have been adapted into films such as the short story ‘Susanna’s Seven Husbands’ and his novel ‘The Blue Umbrella.’

In 1992, Ruskin Bond won the Sahitya Academy Award for his book ‘Our Trees Still Grow in Dehra.’ In 1999, he received the Padma Sri award. In 2014, he was awarded the Padma Bhushan Award.

Ruskin Bond never got married and lives with his adopted family in Mussoorie. He is currently eighty three years old.