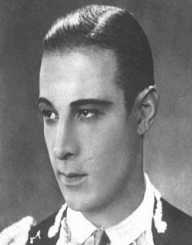 Rudolph Valentino is a celebrated silent film actor in America whose notable films include The Sheik and The Four Horsemen of the Apocalypse. Famously known as the Latin Lover, he was originally from Italy and became an iconic persona during the early 1920s if not for his untimely death at the age of 31.

Rudolph Valentino married to Jean Acker in a spur of the moment event when Acker was caught up in a lesbian love triangle drama. They separated after a short while in 1921 but remained as friends until his death. He met his second wife Natacha Rambova whose real name was Winifred Shaughnessy, on the set of one of his films in 1921.

They were married for the first time in 1922, but because he was not fully divorced for a year, Valentino was arrested on the ground of bigamy as stipulated by the law. They remarried in 1923 at Indiana but led to a bitter divorce in 1925.


The Birth of the Latin Lover

Rudolph Valentino was born as Rodolfo Alfonso Raffaello Pierre Filibert Guglielmi di Valentina d'Antonguella on May 6, 1895, at Castellaneta in the Kingdom of Italy.

His father was an Italian man named Giovanni Antonio Giuseppe Fedele Guglielmi di Valentina d'Antonguella who worked as a veterinarian while his mother was a French woman named Marie Berthe Gabrielle Barbin. Valentino's siblings consisted of an older brother named Roberto, an older sister who died at infancy named Beatrice, and his younger sister Maria.

Because of his striking looks even as a child, Rudolph Valentino was well-loved by those around him most especially his mother who adored him while his father frowned upon him. He earned a certificate in an agricultural school for his education because his school performance was terrible.

During his teens, Rudolph Valentino lived in Paris until he was 17 and returned to Italy for work but was unable to find employment hence his relocation to the United States the following year in 1913.

In New York, Valentino did a variety of odd jobs to support himself such as gardening and waiting tables. He also worked as a tango instructor for $50 per week wage under restaurant owner Joe Pani's employment and as a cab driver at Maxim's Restaurant Cabaret.

Three years after his relocation to New York, Rudolph Valentino first got a taste of theatrical industry by joining an operetta company bound for Utah and disbanded there. Valentino was always on the move and ended up in San Francisco where he met the actor Norman Kerry. At the time, it was the era of silent films, and Kerry convinced Valentino to pursue a career in the industry.

The two decided to stick together living in the Alexandria Hotel in Los Angeles. Valentino continued being a dance instructor and in due time, landed small roles in films and befriended a lot of women who lent their luxury cars to him. In 1919, June Matthis spotted Rudolph Valentino's talent in the drama Eyes of Youth.

Matthis was a screenwriter and thought that Valentino was a perfect fit for her upcoming movie which led to Valentino's cinematic success.

Rudolph Valentino was stereotyped into playing the role of villain due to his sharp features in contrast to the American actors. Growing tired of these roles, he went back to New York and settled in Bayside Queens. During that time, he happened to read Vicente Blanco Ibañez's book entitled The Four Horsemen of the Apocalypse.

The Metro company had bought rights of the story for the film, and they cast Valentino for the lead role. The film became one of the highest grossing silent movies of all times and a second installment was made where Valentino met his second wife on set.

Upon resigning from Metro, he found employment at Famous Players-Lasky production wherein they produced one of his most famous films entitled The Sheik. It was followed up by numerous other films such as Blood and Sand, Broken Blossoms, and The Son of the Sheik.

Rudolph Valentino died at the age of 31 on August 23, 1926, after slipping into a coma after a serious of complications at the hospital. It started with gastric ulcers and appendicitis which led to complications.

His death shocked the whole nation and set the public in grief and disbelief. He was buried at Hollywood Forever Cemetery beside June Matthis who arranged for his burial and later on buried beside him upon her death.