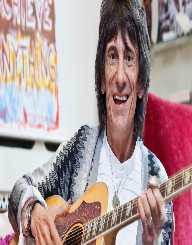 Ronald David Wood globally known as Ronnie Woods was a great English musician, songwriter and a guitarist whose splendid performance has inspired many upcoming musicians in the world. He had a great passion for music from his childhood and had a proven track record throughout his life. Also, Wood is a gifted painter who holds several painting exhibitions across the United States of America and other countries. He has performed with many English orchestras and is associated with the Faces and ‘The Rolling Stone Band.’

Ronnie Woods was born on June 1, 1947, at Hillingdon, Middlesex in England. He was born in a family of English ‘bargees’ also known as ‘water gypsies.’ He is the last born of two siblings Art Wood and Ted Wood who were musicians and graphic artists respectively. He was raised in Yeisley and attended different schools; St. Stephen’s Infant school, St. Mathew’s Church of England junior school and St. Martin’s secondary modern school. Afterward, he joined Ealing College of Art in W. London. His skills in music became evident at the age of three years and later at age 10 when he had his first concert with Father Arthur, an artist.

Ronnie Woods first started as a guitarist, a skill that aided him throughout the music industry. His skills got him into ‘The Bird’ band where he played the guitar. In 1967, he merged with ‘Jeff Beck Group’ and acted as a bassist. However, their group parted ways in 1969 forcing him to join a new group known as the ‘Faces.’ This was his great debut in Europe and the United Kingdom. He decided to join another group of the band known as ‘The Rolling Stones’ in 1975. He gained good experience with the band and surged his potential into writing songs.

During his time with ‘The Rolling Stones’ he met his long-term friend, Keith Richards who invited him to participate in the recording session of the ‘Black and Blue Band,’ after that, he participated in the production of several albums for the group. Later, he managed to release remarkable albums by himself in collaboration with Keith Richard in 1974.These include: ‘I’ve Got My Own Album ‘To Do’ and ‘Gimme Some Neck,’ ‘I Feel Like Playing’ which was featured in 2010.

Ronnie Woods produced an album in 2001 entitled ‘Not for Beginners.’ He also traveled around with his band ‘The Ronnie Wood Band’ which encompassed his family members Andrea Corr and Slash. Besides, together with George Harrison he composed a song and released a DVD with the title ‘Far East Man.’ In 2012, he got appointed for ‘Rock and Roll Hall of Fame.’ Ronnie is also gifted in painting work and has excelled in the field of painting. He has held several exhibitions across the United States and the United Kingdom. Moreover, his accomplishments in paintings earned him a place at London Drury Lane Theatre.

Ronnie Woods got married to Krissy, a former model and was blessed to have Jesse as their son in the period between 1971 to 1978.Their marriage did not last long since he started an affair with Jo Wood and later settled down with her in 1985.They had a son named Tyrone and a daughter, Leah. They lived a happy family life for quite some period.

Unfortunately, due to some upheavals in their marriage, they separated, and he got married to the third wife named Ekaterina Ivanova and had a child called Jamie woods.

In some point in life, he got arrested following a domestic violence on December 03, 2009.Time elapsed and he later got married to Sally Humphrey who was thirty-one years his junior. He claims she has taken good care of him and does not regret having her as his wife. To date, Ronnie has ten grandchildren.

Ronnie Woods became an alcoholic, taking two bottles of Vodka a day, a trend which left many people apprehensive and fearing for his life. His health deteriorated due to addiction. However, his daughter Leah Woods, an activist for alternatives medicine has looked into his father’s situation and has explored alternative therapies to keep him young. In the past, he used other drugs which severely affected his health and resulted in severe mood swings. Lately, rehabilitation has changed his life, and his health has improved a great deal.

As an outstanding person, his charitable endeavors towards the community are well known. For instance, he has participated in charities such as Nordoff Robins, Novak Djokovic project, and contributed funds for the Nepal earthquake victims.