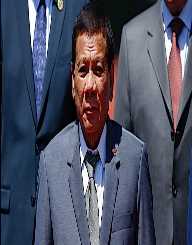 Rodrigo Duterte is a Filipino legal advisor and acting President of the Philippines. He took an oath as the sixteenth Head of State in June 2016.Before fame; he served as a mayor for more than a decade in Davao City. He was also appointed as a member of Congress of Davao City. In his tenure, Rodrigo is known as a no-nonsense man who still advocates strict approach to lawbreakers. For this reason, Davao City is currently regarded as one of the most crime-free Metropolis in the Philippines. Along with his stature, several controversies followed him which made him earn a pseudonym The Punisher. Nevertheless, Filipinos define him as a true leader, who will come to eradicate tons of crime and perils that hound them all day long. Read further to know more about Rodrigo’s life.

It was on 28th, March 1945 that a duo called Vicente G. Duterte and Soledad Roa were blessed with their second born son in Maasin, Philippines. The young lad was none other than Rodrigo Roa Duterte whose father served as a lawyer in Cebu, Philippines. He was then appointed as the present mayor of Davao and later on as the provincial governor of Davao Province. His mother, Soledad served as a civic leader and a school teacher. At his tender age, he loved to spend time with his four siblings; Eleanore, Emmanuel, Benjamin, and Jocelyn.

Rodrigo aka Digong first went to Laboon Elementary School in Maasin. It was after a year that his father took them to stay at Davao City. After settling down, he was enrolled at Santa Ana Elementary School where he completed in 1956.However, he didn’t seem to have a smooth education like other students. Rodrigo was dismissed from different schools for his ill-behaved demeanor. Afterward, he joined Holy Cross College now called Cor Jesu College where he passed out tremendously.

In the meantime, early in 1983, a popular demonstration called People’s Power Devolution commenced with force. They wanted to get rid of Ferdinand Marcos’s dictatorship and tyranny. It was also the same time that Rodrigo got a seat as the Vice Mayor of Davao City.

Early in 1988, Duterte vied for a Mayor seat where he won with a majority of votes. In the same manner, he remained in the seat for two terms till the end of 1998.In his tenure, he came up with a plan for selecting his assistant and other cities emulated his practice.

In 1998 Rodrigo was forbidden to vie for a Mayoral seat according to civic rules. It was there that he opted to try another position of joining a House of Representative. He was lucky to win the race with significant votes. For four years, Duterte served as the Member of the Congress of Davao City. According to him, it was a temporary position that led him to resign in 2001 where he went running for his previous position in Davao City.

From 2001 to 2007 Rodrigo was once again appointed as the Mayor of Davao. It was the same period that Davao City improved regarding security and employment. In fact, the city garnered the National Literacy Hall of Fame Award as well as Highly Urbanized City recognition.

Also, Rodrigo was seen as the ‘leading god’ of the Davao City. He lawfully prohibited serving and selling alcohol drinks during the day. He also came up with a women’s rights bill that came to promote women’s rights.

In 2014 Rodrigo Duterte opted to establish a new form of government where several states unite as one tribe. It was a form a federal government that made him run for a presidential seat. At first, he was in doubt since he hated to loose in the end. Afterward, he came to agree, and the General Elections was done on 9th, May 2016.On May 27th, 2016 Rodrigo was announced as the next sixteenth President of the Philippines under PDP-Laban Party. His tenure began on June 30th, 2016.

One of the most significant and major works that Rodrigo did was to eradicate the level of addiction in Davao City. Although several critics followed him, he stood firm till the end of his tenure. As a result, he constructed a drug rehabilitation center that still provides twenty-four services to Filipinos. While still playing as the Mayor of Davao, he also came up with a plan to eradicate crimes in his city. It was during his doctrine that unlawful acts decreased drastically.

In the mid of 1973, Rodrigo Duterte tied a nuptial knot with Elizabeth Abelian Zimmerman. The house was blessed with three children named Sara, Paolo and Sebastian Duterte. Nevertheless, Rodrigo wasn’t a loyal husband. Even before partying ways with Zimmerman, he publicly announced about his affairs. In 1990 Rodrigo started to have an open relation with Cielito Avancena, a businesswoman. They currently live together in Manilla with their daughter called Veronica. For some time Rodrigo was known as a heavy smoker which made him suffer from an inflammation of blood vessels. As a trivia, Rodrigo doesn’t seem to claim fame and recognition in his life. For instance, in 2014 he was presented with World Mayor Award, but he declined it since it was his duty to serve the Davao residents.