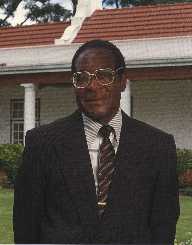 Robert Mugabe was born on February 21, 1924. Robert is a former revolutionary, a Zimbabwean politician and the president of Zimbabwe, which was formerly known as Rhodesia, since 1987. He was prime minister of Zimbabwe as from 1980 to 1987. Being an African socialist and nationalist, he founded Zimbabwe African National Union-Patriotic Front (ZANU) party. This party was a resistance movement against the British rule. As president, Mugabe has managed to unite ZANU and the Zimbabwe African People’s Union (ZAPU).

Robert Gabriel Mugabe was born on February 21, 1924, at the Kutama Mission village in Southern Rhodesia. He was born to Gabriel (father) who was a carpenter and Bona (mother) who taught Christian catechism to the village children. Robert was brought up among five siblings. His family was from the Shona tribe. He went to Jesuit Roman Catholic Schools where he was deemed an exemplary student who was friends with his books. In 1941, he got into the Kutama College to take a teaching training course. While in college he also taught at his previous school as part of the education he was getting.

Father O’Hea was a significant influence on him as he taught him that all people are equal and no one is far better than the other. He continued to teach in schools in Southern Rhodesia. In 1949, Robert Mugabe took on a scholarship to study at the University of Fort Hare in South Africa. In 1951, he graduated from the university with a Bachelor of Arts degree in history and English. Mugabe continued to teach in Southern Rhodesia while taking up correspondence courses which landed him a second degree, Bachelor of Education.

Robert Mugabe, later on, moved to Northern Rhodesia where he taught at Chalimbana Training College. At this time he was also taking correspondence courses with the University of London for a Bachelor of Science Degree in Economics. Robert finished his degree after moving to Ghana. He met his first wife at St. Mary’s Teacher Training College where he was teaching. In Ghana, he declared himself a Marxist.

Robert Mugabe joined the National Democratic Party in 1960 and later joined the ZAPU which was led by Joshua Nkomo.  In 1963, he founded ZANU which was a socialist party against colonial rule. Mugabe was arrested in 1964, and ZANU and ZAPU were banned due to series of political unrest. While still in prison, Mugabe was elected to take over ZANU in 1974. He was released from jail the same year so that he could go to a conference in Zambia. Mugabe fled back to Southern Rhodesia, and he trained rebels.

The struggle for independence continued through the 1970s because at the time the whites ruled southern Rhodesian and blacks were discriminated upon. After all the efforts by Robert Mugabe, the British colonies agreed to observe the switch to black majority rule in 1979. The United Nations raised sanctions to deal with the matter.

In 1980, Southern Rhodesia gained independence from the British and became the Independent Republic of Zimbabwe. In the same Robert Mugabe was elected through ZANU to become the prime minister of the first government. Mugabe tried to unite ZANU and ZAPU at that period, and it did not work due to ideological differences. In 1987, the two groups lost two ministers, and so Mugabe and Joshua decided to merge their unions for the quick recovery of Zimbabwe’s economy and the development of the country as a whole.

In 1987, Robert Mugabe became the president of the Republic of Zimbabwe. Joshua became one of his senior ministers, and within five years the economy of Zimbabwe had improved. In 1996, many of Mugabe’s supporters started going against him as they did not support many of his political strategies. This led to political unrest in the country. Mugabe won the presidential elections in 2002, and he tried to bring Zimbabwe back to its feet as the country’s economy was terrible and unemployment was the order of the day.

In 2008, Morgan Tsvangirai won the presidential elections, but Robert Mugabe refused to leave the office demanding a recount of votes. This situation led to political unrest and the loss of lives of so many people as Mugabe now resorted to violence to keep the presidency. After the loss of many lives, Mugabe and Morgan decided to share the power. Mugabe still wanted absolute control of the government that he did not consult Morgan when selecting provisional governors for Zimbabwe in 2010. In 2013, Mugabe won the presidential elections again. Zimbabwe’s Election Commission announced that he had won 61% of the votes.

Robert Mugabe holds degrees and doctorates in different fields of study which were presented to him in the 1980s, including Bachelors Degree in Education among others. He also got a spot in the United Nations when he was elected the UN Leader of Tourism. Mugabe has been Zimbabwe’s president since 1987 to date.

In 1961, Robert Mugabe married Sally Hayfron, and they were blessed with a son who died at the age of 3. Sally died in 1992 of kidney complications. In 1996, he married Grace Marufu with whom they had two kids even before the marriage.