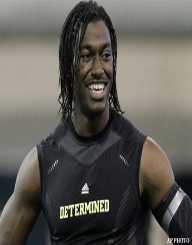 Robert Griffin III was born on February 12th, 1990 in Okinawa, Japan. He was later nicknamed ‘RG3’ for his remarkable football skills. Griffin earned his fame for being a football quarterback with an amazing talent. Back in college, he used to play for Baylor Bears football where he won the Heisman Trophy in 2011. In 2012 NFL Drafting, he was ranked as second during the first round of the drafting process.

Robert Lee Griffin III AKA Robert Griffin III was born on February 12th, 1990. His parents were Jacqueline and Robert Jr.; both parents were U.S. Army sergeants. When Griffin was still young, his family moved from place to place before later settling down in Copperas Cove, Texas. This was after they had retired from the military in 1997.

Robert Griffin III was destined for greatness right from the time he was in high school. During this period, he schooled at Copperas Cove High School. His talent was unique and diverse in different sports including football, field, and track. He began breaking records as a junior quarterback player. For example, he set the record in the hurdles (110-meters) in just 13.55 seconds. Also, he broke records in the 300-meter hurdles going 35.33 seconds. His notable performance landed him to the player of the year in the season beginning 2006 and ending 2007.

Robert Griffin III continued performing well during his senior year. As a quarterback, he passed for 1,356 yards and also making 16 touchdowns. He also compiled rushing yards amounting to 1,285 with 24 successful touchdowns and completing his senior season with 13-2 record. However, he lost during the Class 4A Division I playoffs which occurred in 2007.

In 2008, Griffin participated in the track competitions which he later emerged victorious in the Big 12 Conference championship. He was the winner of 400-meter hurdles with a record of 49.22 seconds. In summer he went for the U.S. Olympic Team Trials where he earned his 11th place still in the 400-meter hurdles recording 49.38 seconds. However, Griffin soon abandoned competitive running with the primary intention of entirely focusing on his football career.

During his freshman years, Robert Griffin III played for the college’s struggling team and made a huge impact. He passed for 2091 yards while at the same time making 15 touchdowns. He also rushed for 843 yards and made 13 scores. Injuries began to affect his career as he did not play a big part in the 2009 season after facing an injury to the anterior cruciate ligament (ACL). Nonetheless, he was back the following season with a good record of 4,136 (passes and rushing yards) and 30 touchdowns.

Griffin rose to fame in the 2011 season. This was the season when his ‘RG3’ personality emerged. With his arm power and speed, he led his Baylor team to victory after victory totaling to 10 wins. They also landed themselves as the 13th team in the AP Poll. His record, Griffin completed the season with 4,293 total passes and 37 touchdowns.

Additionally, Robert Griffin III ran for 699 yards with ten touchdowns. These records earned him the Heisman Memorial Trophy as he was the best player in the college. In December the same year, he completed his studies and graduated with his political science degree. The 2012 NFL Draft carried out by Washington Redskins chose him as their second pick.

Robert Griffin III  brought a considerable change to the Washington Redskins, a team that had a few fans in recent years. He began setting records for the team throwing for 320 yards and making only two touchdowns. During this time, they had won 40-32 against New Orleans Saints. His exceptional performance during his debut game earned him the NFL Offensive Player of the Week. He was the first rookie quarterback to achieve this honor. His continued success in the coming weeks landed him the reputation of being the Rookie of the Month.

With the strides that he was making in his football career, Robert Griffin III was made captain. His historic performance came with the triumph over Philadelphia Eagles in November. In December, his performance was significantly affected by subsequent injuries. This made him feature in a few games but helped his team clinch victories during his involvement. He won NFL Offensive Rookie of the Year award for the same year.

Robert Griffin III married Rebecca Liddicoat in 2013. She was also a student at Baylor College. The relationship did not take long as the two separated in 2016. Griffin went on to date Grete Šadeiko. Griffin has one child from his previous marriage with Liddicoat.