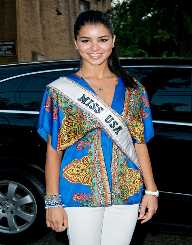 Rima Fakih was born on September 22, 1985. She is an American model. In 2010, she won the title of Miss USA. She was born into a Muslim. Her family immigrated to the United States when she was seven years old. She was also won the Miss Michigan Competition in 2010. She actively takes part in Hollywood films and reality television shows. She loves that she is a role model to very young people as she aims to bring change in the society and the world as a whole.

Rima Fakih was born on September 22, 1985, in Srifa, a small city in the Jabal Amel region of Southern Lebanon. She was born into a Muslim family. She was born to Hussein and Hadia Fakih. She was brought up alongside four siblings, Rabih, Rami, Rana, and Rouba. The family lived in the village of Souk El Gharb in Mount Lebanon. She attended St. Rita’s Catholic School near Beirut. In 1993, her family immigrated to the United States of America to escape the effects of the Lebanese Civil War. In the United States, she attended I.S. 145, Jackson Heights, Queens, New York and St. John’s Preparatory School, Flushing, Queens.

In 2003, her family moved from New York to an Arab American community in Dearborn, Michigan. Rima Fakih later graduated from Henry Ford Community College. She loves giving back to the community and after college that is what she did while she was attending the University of Michigan. She graduated from the university with a Bachelor of Arts Degree in Economics with a minor in Business Administration. In the university, she served as the class senator and the President of Students in Free Enterprise.

Rima Fakih competed in her first pageant at the age of nineteen. She became number four at the Miss Wayne County, which was a preliminary pageant for Miss Michigan and Miss America System. In 2008, she was selected to represent Michigan in the Miss Lebanon Emigrant Competition where she became third in the contest. In 2009, she entered the Miss Michigan USA Pageant. She won the pageant and went to represent Michigan at the Miss USA 2010 Pageant. In 2010, she won the title of Miss USA and became the first Miss Michigan USA win the national title since 1993. Her victory was celebrated by Arab Americans, but Muslims accused her of profanity. She was criticized for having appeared in a bikini hence held responsible for severing the image of Muslim women.

Rima Fakih went ahead to represent the United States in the 2010 Miss Universe Pageant, but she did not earn a place as a semi-finalist. In the same year, she served as a ring announcer for the matches at the WWE Tribute to the Troops. She also participated in the WWE Tough Enough, but she was eliminated from the show on season four of the show. After being crowned Miss USA, she appeared in different platforms such as her attending an American Chamber of Commerce Conference in Cairo alongside former United State’s President Bill Clinton. In 2011, she starred in the movie ‘Real Steel.’ The following year she participated in Fox’s dating game show ‘The Choice.’

Rima Fakih has been honoured by organizations such as The Ethnic Foundation of Understanding, Arab Anti-Discrimination Committee, and Renee Mowad Foundation. She was also presented the key to the city of Connecticut.

In 2011, Rima Fakih was arrested for drunk driving in Highland Park, Michigan. She was convicted and sentenced to six months probation, twenty hours of community service and $600 fine.