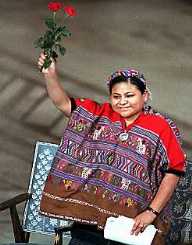 Rigoberta Menchú is widely known as a noble activist and a Nobel Peace Prize winner. She has worked hard to create awareness of the hardship of Guatemalans throughout the 1960 to 1996 Civil War. Some of her published work includes the Crossing Borders and Rigoberta Menchu. Since her childhood years, Menchu has experienced intense misery including the loss of her family members to the tyrannical regime. For this reason, she joined activism at her tender age following his parent’s opposition.

Rigoberta was still a lucky bird till when she firmly organized for a protest in the 1980s.Within no time, she found herself behind bars. Even then Rigoberta stood by her own decision, and she didn’t show any sign of giving up. Her active life was later chronicled in two remarkable books as well as documentaries. She maintained an upright position when it came to defending the poor against ill-treatment.

On January 9, 1959, Rigoberta Menchu was born in Laj Chimel, in Guatemala to Juana Tum and Vicente Menchu. Menchu spent her childhood years with her nine siblings. He came from a poor background where she learned how to plough at her tender age. She worked on different farms for the sake of supporting her impoverished family. His childhood life came to affect her middle age life where it also influenced her to be a future activist. She lost her younger brother, not to a short illness but severe starvation. They endlessly struggled to make ends meet.

In her teenage years, Menchu involved herself in activism where she served on the women’s rights groups. During the Guatemalan Civil War, her passion started where she began to go against the said government. Her father got involved with another activist where he was sent to exile and tortured mercilessly. Despite his father’s term in prison, Menchu joined Committee of the Peasant Union where she continued to fight for her rights.

Menchu followed his father’s footsteps to the core. In the 1980s she teamed up with another protest that was earlier organized by the CUC.In 1981, Menchu gained strength, and she managed to demonstrate for negligence and starvation. She smelled a rat from afar where she fled to Mexico to avoid further punishment. While at it, Rigoberta worked for Mayan, but she continued to expose the evil rulership in Guatemala.

In 1982 Menchu founded The United Representation of the Guatemalan Opposition. The group opposed the Guatemala rules and regulations. In 1983 she teamed up with the 31st-January Popular Front where she started to educate other members the method of fighting back. After three years, she continued with her word to the National Coordinating Committee.

In the mid of 1956, Menchu became an ambassador for UNESCO due to her peace regime as well as protecting the rights of other people. After two years, Rigoberta published her autobiography titled Crossing Borders. In 2006 Menchu’s hard work and tears paid off when Guatemala war ended. After one year, she tried to vie for a presidential seat of Guatemala, but other parties succeeded her.

Rigoberta lost tons of relatives and friends due to the Guatemalan Civil War, and her father wasn’t spared. Her mother was also tortured and killed as a result. At 58 years old, Menchu is not yet married. She has fully dedicated her whole life to her motherland. Her main aim is to help the oppressed to understand their rights around the globe. In 2006 she founded the Nobel Women’s Initiative which contributes to defining women’s rights around the world.