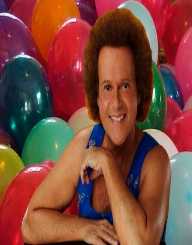 Richard Simmons is typically an all in one person. He is a promising entrepreneur, athlete, dancer, activist, and television personality. But he is mostly known for his intense workout in the 1980s.Since then, he has helped the young and the old to shed off some weight. In the process, he re-introduced some workout videos that are famously known as Sweatin’ to the Oldies. He possesses an energetic personality which wasn’t the case when he was in his teenage years. He was practically an overweight lad who never thought that he would one day come to put a smile on lots of individuals. Even then, Richard has had some ups and downs as he was trying to shed some extra kilos. Read further to understand more about his past and present achievements.

Among other personality, Richard Simmons loves to embrace his limitation, direction, and self-love. Even when he was in his bad state of health, he created a beautiful expression towards his loved ones. His end goal was to innovate sensibly and realistically. In that case, he didn’t want others to feed his low esteemed nature. So he opted to create a secure environment that will come to dominate his goal setting at the end of the day. Besides, Richard loves to travel far and beyond, not to work but to apprehend his ideals. Another exciting thing about him is that Richard symbolizes a spiritual power that works perfectly with those that are close to him. The innate power was always seen when he tried to get rid of his friend’s negativity. In the process, he helped to awakened one another’s calmness throughout his fitness career.

On July 12, 1948, Milton Teagle Simmons was born in New Orleans, Louisiana in the U.S. He was born to Leonard Douglas Simmons and Shirley May who both ventured into show business. Simmons joined Cor Jesu High School. He used to be bullied around due to his obese nature who weighed over 260 pounds after his high school graduation. He attended the University of Southwestern Louisiana and later went to Florida State University. It was here that he called himself as ‘Richard’ after his uncle who funded his studies. He then graduated with a B.A in Art.

Simmons wasn’t okay with his weight. This made him try different alternatives such as taking diet pills. Yes, he lost some weight, but he almost turned her hair into a rough bald. This is what made him embrace a healthy lifestyle of losing weight in an approached manner.

After graduation Simmons went to New York where he majored in odd jobs. He once served as an advertising company that was famously known as Coty Cosmetics. After taking several of diet precautions without success, he was more than determined to find a natural method of shedding some pounds. It was here that he came up with a routine of eating moderately as well as combining regular exercise. This acted as a wake-up for him.

In the mid of 1970, he went to Los Angles where he landed his first gig at a lavish restaurant in Beverly Hills. As much as he loved to keep fit; his impoverished situation lowered his self-esteem. He didn’t have their ability to purchase workout gears. Also, most of the gym facilities registered healthy individuals instead of untrained personnel.
Above anything else, Simmons was more than determined to open his gym. He aimed to cater for all weights and ages hence helping them to have a healthy lifestyle. Early in 1974, he came up with his studio known as The Anatomy Asylum. He then consulted different nutritionists and doctors where he came up with a healthy program and exercise routine.

To date, Richard works as a tutor in a group of a class called Project Me. He has been an exemplary teacher for over four years. His simple to learn training is loved by all ages, especially the elderly who want to keep fit. After several years, he came to rename his studio as Simmons which turned out into a famous place for losing extra kilos. Soon, he was invited to different shows to showcase his program. In the process, he appeared in a General Hospital drama for five years. He was also seen on celebrity game shows including Super Password, Body Language and Lose or Draw.
Since 1980s Richard began to embrace a healthy lifestyle that he created his show: The Richard Simmons Show which aired for four years. It was here that he engaged viewers on personal health, exercise routines and eating healthy. He managed to release over 70 fitness videos and made a profit of 20 million in two years. Richard is also an astounding author. He has showcased this skill by writing different genres of the book including Never Say Diet among others.

Simmons was recognized with several awards such as Emmy Award and Daytime Emmy Award in 1982. He is also known as a happy being who likes to interact with people, especially those who attend his studio. In spite of his tight schedule, he prefers to reply to his fans directly through phone calls, emails, and letters. Richard Simmons is a single man who currently lives in California with his dearest pet Dalmatians. He doesn’t like to disclose about his personal life.