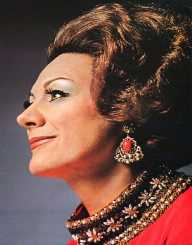 Renata Ersilia Clotilde Tebaldi was born in the town of Pesaro, Italy, on February 1, 1922. Her mother, Giuseppina, was a nurse. Her father, Teobaldo, was a cellist. The two of them split up before she was born. She spent her childhood with her grandparents in the commune of Langhirano. There, she was part of the church choir.

Renata Tebaldi started attending piano lessons at the age of 13. At the age of 17, she began taking lessons at the conservatory in Parma. There, she studied under the composers Italo Brancucci and Ettore Campogalliani. After that, she joined the conservatory in Pesaro. There, she was taught by the opera singer Carmen Melis. Years later, she also studied under Beverly Peck in the United States.

Renata Tebaldi began her career in 1944. She starred in the opera Mefistofele, performed in Rovigo. She continued in many other productions, such as Otello, Andrea Chenier, La Boheme, and others. In 1946, she started performing in Milan in La Scala, one of the most famous opera houses in the world. She took part in productions such as Mose in Egitto and Die Meistersinger.

Tebaldi’s big break came in 1950. She took the lead role in Aida, an opera describing events in Ancient Egypt. That same year, she went on a tour. She performed at the Edinburgh Festival, the San Francisco Opera, and Covent Garden in London. In 1953, she sang the musical parts in the film adaptation of Aida, although the role was played by actress Sophia Loren.

In 1955, Renata Tebaldi performed at the Metropolitan Opera in New York City. She spent the rest of her career mostly focusing on her performances there. She starred in numerous operas, such as Madame Butterfly, La Gioconda, La Traviata, La Forza del Destino, and others.

Tebaldi retired from her career in the mid-1970s. In total, she completed over a thousand performances, including operas and concerts. She had a long and highly-publicized professional rivalry with the Greek-American opera singer Maria Callas. The two of them eventually made peace.

Renata Tebaldi never married and had no kids. She was in a relationship with the conductor Arturo Basile. She also briefly dated the opera singer Nicola Rossi Lemeni.

Renata Tebaldi died on December 19, 2004, in her house in San Marino. She was buried in her family’s chapel in Langhirano.

From 2010 to 2013, Langhirano hosted an exhibition dedicated to Tebaldi. In 2014, an entire museum dedicated to her was opened in Busseto.