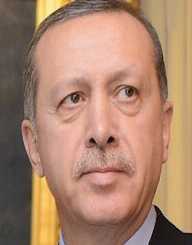 Also Known For : President of Turkey

The current serving President of Turkey, Recep Tayyip Erdo?an was born on February 26, 1954, in the Kasimpasa quarter of Istanbul, Turkey to Ahmet and Tenzile Erdo?an. His father Ahmet Erdo?an worked as a captain in the Turkish Coast Guard and was stationed at Rize. Recep Tayyip Erdo?an spent his early childhood days in Rize. He returned to Istanbul at the age of 13 along with his family.  Erdo?an hailed from an ethnic Turkish ancestry, formerly a resident of Güneysu, Rize, where he often went for spending his summer holidays. He has one younger brother Mustafa and one younger sister Vesile.

Brought up in a devout Muslim family, Erdo?an was raised in a family of limited resources. He sold Lemonade and sesame buns on the streets as a teenager to make ends meet. He attended the Kas?mpa?a Piyale primary school and graduated from there in 1965. He subsequently attended the Imam Hatip school, a religious vocational school and graduated from there in 1973. He secured his high school diploma from Eyüp High School. After that, he studied Business Administration at the Aksaray School of Economics and Commercial Sciences (presently known as Marmara University) and earned a degree in Business Administration in 1981.

During his days in the religious Imam Hatip School, Recep Tayyip Erdo?an became involved with the National Turkish Students’ Association, an anti-communist association. He was good at playing football and had played semi-professional football at a local club in his youth for many years. He was on the radar of the top professional football club of Turkey but was prevented from further pursuing his football career by his father. The stadium of the local football club of the Kasimpasa S.K. district, he was associated with, was later named after him.

A fiery orator since his school days propagating the cause of political Islam, Recep Tayyip Erdo?an came in contact with veteran Islamist politician Necmettin Erbakan and became actively involved with National Salvation Party led by Erbakan. In 1976, he was elected to head the Beyo?lu youth branch of the Islamist National Salvation Party (MSP). He was later elevated to chair the Istanbul youth branch of the party. The 1980 military coup saw the dissolution of his party and Erdo?an temporarily started working as an accountant and manager in the private sector after having obtained his degree from the Marmara University in 1981.

Recep Tayyip Erdo?an again returned to active politics after a new party in the name of ‘Islamist Welfare Party’ was formed with the former members of the Islamist National Salvation Party under the leadership of Erbakan in 1983. Erdo?an became the party’s Beyo?lu district chair in 1984. In the following year, he was made the chair of the Istanbul city branch and was included to the Central Executive Board. Under his leadership, the party tasted success in the 1989 municipal elections.

Erdo?an was elected Mayor of Istanbul representing his Islamist Welfare Party securing 25.19% (plurality) of the popular vote in the local election held on 27 March 1994. With a utilitarian approach, he started working on to solve many perpetual problems of the city such as water shortage, traffic chaos, pollution and became successful to a considerable extent in his endeavour, improving the city’s infrastructure in the process. He also banned alcohol from city-owned cafes reiterating his stand as an Islamic leader.

In December 1997, Recep Tayyip Erdo?an recited a slightly altered version of a poem written initially by Ziya Gökalp, a pan-Turkish activist of the early 20th century, in Siirt. The poem included the lines “The mosques are our barracks, the domes our helmets, the minarets our bayonets and the faithful our soldiers," which are not in the original version of the poem. He was charged with infringement of secularist law, provoking religious hatred and inciting violence. Convicted of his charges he was given a sentence of imprisonment for ten months. Following his imprisonment, he had to resign from his Mayoral post.

Erdo?an had to serve four months of imprisonment out of his ten-month sentence. He came out from prison on July 27, 1999, and again re-entered politics by helping to form a new political party by the name of Justice and Development Party (AKP - Adalet ve Kalk?nma Partisi) in 2001. His newly formed party became victorious in the 2002 parliamentary elections winning 34.3% of the national vote and formed the Government. His political ban debarring him from holding any public office was soon overturned through a constitutional amendment and on March 9, 2003, he was elected to the post of Prime Minister of Turkey. He was twice re-elected to the position afterwards.

His long tenure of Prime Ministership from 2003 to 2014 was successful concerning development but not without its fair share of controversies. As a Prime Minister, Recep Tayyip Erdo?an relentlessly worked towards improving ties with other countries, especially with the Western Allies. He reined in inflation and invigorated foreign investment. He was instrumental in raising the country’s per capita income and boosting the credit ratings. However, he gradually went on to increase his authority and became synonymous with being a power-hungry authoritarian leader over the years.

By 2014, Erdo?an reached the end of the term limit of his Prime Ministership. He was chosen as the Presidential candidate of his party in the first direct election for the Presidency. On August 28, 2014, he became the 12th President of Turkey. After briefly losing the majority in the June 2015 parliamentary election, his party AKP came back strongly regaining the majority in the November 2015 election after having failed to negotiate for a coalition government in the aftermath of the June 2015 election.

On July 15, 2016, Recep Tayyip Erdo?an narrowly escaped an attempted military coup to overthrow him. He was vacationing with his family when his hotel was raided, and he somehow managed to flee to Istanbul safely. He declared the National State of Emergency to corner and overthrow his political opponents and consolidate more and more power in his hands.

Recep Tayyip Erdo?an married Emine Gülbaran on July 4, 1978. The couple is blessed with two sons, Ahmet Burak and Necmettin Bilal, and two daughters, Esra and Sümeyye. Erdo?an’s father passed away in 1988, and his mother left for her heavenly abode in 2011.