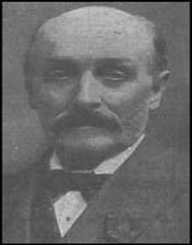 Randal Cremer who won the Nobel Peace Prize in 1903 was born on the 18 March 1828 in Fareham, Hampshire, England. He came from a poor working-class family, his family being a coach painter. After his father deserted the family when Cremer was still very young, his mother raised her son and his two sisters alone.

Randal Cremer was sent to a local Methodist school but had to leave at a young age to take up an apprenticeship to help support the family. Working in the shipyards, he attended night classes to further his education and completed his apprenticeship as a carpenter.

In 1852 when he moved to London Randal Cremer was a qualified journeyman carpenter. He joined the trade-union movement. Not long after this, his skills at leadership and organization meant that he became the national leader of the carpenters union and a member of the London Trades Council. He was also actively involved in organizing the campaign for a nine-hour day.

In 1858 he was elected to the council partly because of his stance on the nine-hour day on which he had campaigned.

Randal Cremer as a trade union leader and member of the working class was interested in various international campaigns involving civil rights and working conditions. This interest led to the formation of the International Working Men’s Association in 1864. Karl Marx and other socialists of the day were also involved in the setting up of the association. In 1865 Randal Cremer was elected the general secretary, but he resigned after two years because of ideological differences.

After the Franco-Prussian War broke out in July 1870, Randal Cremer attended a public meeting of workers in London to oppose British involvement in the conflict. A peace committee was set up with Cremer as the general secretary. In December 1870 the committee changed the name to the Workmen’s Peace Association. The focus of the association was to work towards advocating international disputes by arbitration and for the establishment of a High Court of Nations.

In 1868 on a liberal ticket, Randal Cremer unsuccessfully ran as a member of parliament for Warwick. He has defeated again in 1875. He then ran for the seat of Haggerston in London’s East End in 1885 and won. After that, he continued to win the seat of Haggerston at each election until 1895 when he was defeated. He won back the seat in 1900 and held it until his death.

The Nobel Peace Prize of 1903 was awarded to Randal Cremer for his work relating to peace and arbitration.

Randal Cremer was married twice. His first wife died in 1876 and his second wife in 1884. He had no children and lived a simple life. He donated the bulk of his Nobel Peace Prize winnings.

Randal Cremer died on the 22 July 1908 after falling ill with pneumonia.

With his skill as an organizer, Randal Cremer worked his way up from poverty to become one of the first of his class to sit in the UK Parliament. He was also one of the early leaders of the international peace movement and one of first Nobel Peace Prize laureates.