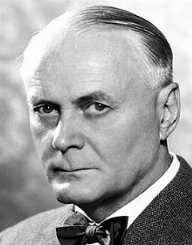 Ragnar Granit was born on the 30 October 1900 in Finland to Arthur Grant and Albertina Malmberg. His family hailed from the island of Korpo which lies in the Baltic between Finland and Sweden

His father’s work took the family to Helsingfors and Granit was enrolled at the Swedish Normallyceum. After graduating from his school, he began studying at Helsingfors University in 1919 where he studied experimental psychology as well as medicine. He became an assistant at the Physiological Institute in 1926 while at the same time continuing with his studies, obtaining his medical degree in 1927 and his doctor of physiology in 1929.

He worked at Charles Sherrington’s laboratory at Oxford for six months in 1928. Then between 1929 and 1931, he was a Fellow in Medical Physics at the Johnson Foundation at the University of Pennsylvania working with Dr. D, W. Bronk. Granit returned to Oxford as a Fellow the Rockefeller Foundation and worked there between 1932 and 1933.

Granit was then offered the chair of physiology in Helsingfors and started working there in 1935; his professorship formalized in 1937. At the same time, he was the district physician for three Swedish speaking islands in Korpo, Houtskar, and Inio.

He was awarded numerous honorary degrees and won many awards including the Nobel Prize, the Hans Cronstedt Prize (1926), the Jubilee Medal of the Swedish Society of Physicians (1947), the Anders Retzius Gold Medal Stockholm (1957), the Sherrington Memorial Gold Medal (1967) and the Purkinje Gold Medal 1969.

As a young man, he won the Cross of Freedom IV CI for his participation in Finland’s 1918 War of Liberation.

In 1929 Granit married Marguerite Emma Brunn. The couple had one child, a son Michael.