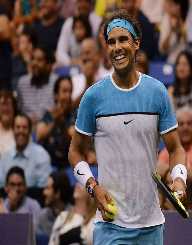 Rafael Nadal is a renowned person for his excellent performance in Tennis. He was initially known as Rafael Nadal Parera. As a Spanish tennis player, he managed to beat Roger Federer who has been known for a long period as a titleholder in the field of tennis. As a result, he secured a title and is now globally recognized as the most significant clay-court player in history. Besides, his powerful shots and intellectual toughness he contributed to his dominance.

Due to his excellent performance, he is among the ‘big four’ best tennis players of his time. In fact, he is in the same league with Federer, Novak Djokovic and Andy Murray who are the world-renowned tennis players.

Rafael Nadal was born on June 03, 1986 in Spain at a place known as Mallorca Manacor in the Balearic Islands. His parents are Ana Maria Parera who was a housewife and Sebastian Nadal, a businessman who owns an insurance company and manages a restaurant.

His interest in tennis became apparent at an early age. To illustrate, when he was three years old his uncle Toni Nadal, a professional tennis player coached him. Thus, at the age of eight years, he participated in an under-12 regional tennis championship, and his win motivated his uncle to support him. Consequently, he gained the experience he needed. This experience prepared him for future games. Having observed these excellent performances, the Spanish Tennis Federation sought his parents’ consent to allow him to train. However, permission was denied.

Rafael Nadal’s skills in tennis improved very fast, and at the age of 15 years, he became a maven. The Boy’s Single tournament was held at Wimbledon, and he managed to advance to the semi-finals. During the third round at Wimbledon, he became the second-youngest male tennis player after Boris Becker.

In 2005, he was only 19 years old, he participated in his first competition in the French Open tournament and won the championship. In the same year, he won eleven titles, eight being held on clay. He played exceptionally well and was labeled “The King of Clay.” His determination contributed to more opportunities. For instance, in 2007, he won ‘Ronald Garros’ and attained other five titles. Henceforth, he won in most of the competitions he had participated. However, Nadal wasn’t successful in all the competitions. To illustrate, in June 2013 he lost straight sets in the first round to Belgium’s Steve Darcis which disappointed his fans owing to the fact their expectations were not met.

This defeat neither made him lose hope nor reduced his zest in tennis. In October 2013, Rafael Nadal defeated Djokovic and emerged a victor in the ninth French Open contest held in June 2014. However, in August the same year, he pulled out. He later embarked in August 2015 during the Australian Open and was defeated by Tomas Berdych in the quarterfinals. This loss was his first setback since 2004. Again, during the Australian Open in January 2016, he attained gold in men’s doubles with Lopez. Moreover, in 2017, he faced his competitor Roger Federer in the finals.

Rafael Nadal dated Maria Francisca Perello popularly known as Xisca, for a decade. She has a degree in business administration and currently works in an insurance company in Palma, Mallorca. However, she does not talk much about their affair and prefers to keep silent.

Rafael Nadal supported the Rafal Nadal Foundation established to help the underprivileged in the society. This foundation has built schools and a tennis academy in Anantapur. Furthermore, he helped some charitable organizations in the past such as City Harvest Elton John AIDS Foundation and Laureus Sports for Good Foundation Small Steps Projects.

Rafael Nadal’s prominence has impacted positively on the lives of people. For example, a famous Italian fashion designer has idolized him. In 2011, he looked up to him as a role model.