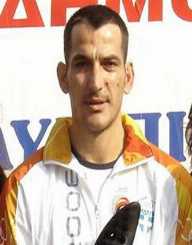 Pyrros Dimas was born on October 13th, 1971. He is a former Greek weightlifter. While engaging himself in the sport, he bagged home three gold medals during the Olympic Games. Recently, he engaged himself in politics and became a member of parliament under Panhellenic Socialist Movement (PASOK).

Pyrros Dimas was born on October 13th, in 1971. His birthplace was in Himara, Albania. Dimas parents were from the Greek descent. He began training as a weightlifter when he was still young. By the time he was aged 14, Dimas had contested in junior weightlifting competitions.

In 1989, when Pyrros Dimas was 18 years old, he emerged as the Albania Champion for the category of 82.5 Kg. The following year, he featured in the same competitions while under coaching by ZefKovaci. His recent performances at this time earned him recognition. During the same year, in 1990, he earned the title of “Master of Sports.” The Albanian government had awarded him this title. Moreover, the European Weightlifting Federation also recognized him under the title of “European Master.”

Dimas was part of the Albanian weightlifting team that brought profound changes to the nation. In 1989, for example, while participating in the 62nd weightlifting World Championship he emerged as number 12 overall. This meant that Albania would be ranked as 13th best in the world.

The following year, Dimas competed in European Weightlifting Championship. During this time, he made exceptional performance and later emerged as number 4. From his contribution, Albania earned the ranking as 3rd best.

When Pyrros Dimas was 20 years old, he emigrated to Greece. A year later, he became a Greece citizen. During the same year of receiving his citizenship, he competed in the summer Olympics. His proficiency in the weightlifting under 82.5 Kg category earned him a gold medal. Winning this medal for Greece meant a lot for his new nation as the nation had not been previously associated with such fame. During the world competitions that were carried out in 1993 and 1995, he was victorious as he became the world champion. He also won the 1996 Summer Olympics gold medal putting a new world record under his name.

The following year, Dimas competed under the 85 Kg category. Here, he also won a gold medal at the 2000 Olympics competition. This medal earned him a spot as one of the Olympic gold medalists to have bagged home three of such gold medals. Later, in 2004, things were not good for Dimas as he was recuperating from a knee injury. This resulted in a dismal performance where he earned himself a bronze medal. This marked his last participation in the weightlifting competitions, and he retired. Due to his remarkable contribution to the sport, he was appointed as Hellenic Weightlifting Federation’s vice president in 2008 before later becoming its president after a few months.

Pyrros Dimas ventured into politics in 2012. In this year, he became a member of Panhellenic Socialist Movement.

Pyrros Dimas is currently wedded to Anastasia Sdougkou. He is a proud father of four children.