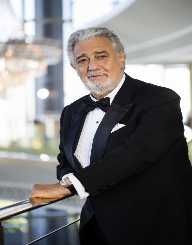 Placido Domingo was born in 1941 in Spain. His parents were Plácido Francisco Domingo Ferrer and Josefa “Pepita” EmbilEnchániz. They both were zarzuela masters. Placido’s father was a violin player, who sang baritone roles. His mother was a soprano.

Placido Domingo’s parents noticed that he had a talent in music when he was just five years old. They noticed it when he could hum music from zarzuela after only hearing it once. Before Placido reached the age of eight, the family moved to Mexico in order to begin a zarzuela company there. His parents were both singers, therefore encouraged also Placido’s talent, and enlisted him to several singing contests, and to attend piano lessons.

At the age of 16, in 1957, he accompanied his mother at a piano concert in Yucatán. This was his first professional appearance. Later the same year he sang a baritone in “Gigantes y cabezudos”. He was working together with his parents in their zarzuela company.

When Placido Domingo was 17, Domingo was replacing a tenor for “Luisa Fernanda”. He was thinking that it was too high for him, but nevertheless did it. Later the same year he sang a tenor role for “El gatomontés”, even though he still thought he was a baritone.

Domingo auditioned in 1959 as a baritone for the Mexico National Opera but instead was given a tenor aria. The Opera took him as tenor comprimario and a tutor.

His first significant role in opera was considered the role of Borsa for “Rigoletto” the same year in September. He sang together with MacNeil and Treigle – both American baritones. Domingo appeared afterward in several performances.

To boost his income, Domingo had additional work as a piano player, and he set the program for a Mexican culture television.

Placido Domingo’s breakthrough in opera is considered to have happened in 1961. He had a role of Alfredo in “La Traviata”. Later the same year he performed also in United States.

In 1962 Domingo decided to agree to sign a contract with the Israel National Opera. Initially, he wanted to stay for half a year but stayed there for much longer – two and a half years. He sang 280 times during the time here.

After the contract ended in Tel Aviv, Domingo went to New York. There he started in 1965 with a tenor role for “Madama Butterfly.”

Later he had several performances in the Metropolitan Opera. Since 1968 Placido Domingo has been opening the opera season more than any other singer – twenty one times. He gained his popularity extremely fast, and performed in the couple following years in several major operas in the world – in Vienna, in Chicago, San Francisco, Salzburg festival and others. Currently he has sung almost in every opera festival and opera house in the world.

Placido Domingo released his first album in 1973. This album he recorded together with Sherill Milnes, a baritone.

In 1981 “Perhaps Love” was recorded. Domingo recorded the song together with John Denver. This was a very effective step to reach his goal – not only to expand the fan base, but also to introduce more people to opera. It is safe to say, nearly every person is familiar with Placido Domingo’s talent. It is not any more restricted only to people who like classical music.

Placido Domingo participated in several filmed operas. The first one was in 1982, “La Traviata,” and was later followed by several others.

In 1985 Mexico City was pretty much destroyed by an earthquake. As some of Domingo’s family still lived there and had been hurt, he traveled to Mexico to help the survivors and canceled several performances. In 1986, Placido Domingo participated in several benefit and charity concerts for the earthquake survivors.

Up to this day, Placido Domingo is still performing and expanding his repertoire. He sang with several other widely known singers like Hoffmann, Cavaradossi, Don José, Alvaro, and others.

An album “Carreras Domingo Pavarotti in Concert” was released in 1992. It received a triple Platinum status. It was sold in more than three million copies in the United States. They performed later together again, and the recordings of the concerts were also released as albums. “The Three Tenors in Concert 1994” was sold in over million copies in several countries.

Placido Domingo married very young, at the age of sixteen. He married Ana Maria Guerra Cué. She was a piano player. They had a son José, who was born in 1958. He is currently a photographer.

They separated after a few years. Placido Domingo then met Marta Ornelas from Veracruz. She was a soprano singer. After getting married, they performed together in Opera in Tel Aviv. She gave the career up when she got pregnant. They had two sons together, Placido Domingo Jr., born in 1965, and Alvaro Maurizio, born in 1968. His family is still together.

Placido Domingo was diagnosed with colon cancer in 2010. He had surgery for it. Later in 2013 he developed pulmonary embolism, but made a full recovery afterward and continued singing.