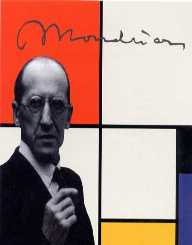 Piet Mondrian was a Dutch painter known for Neo-Plasticism a non-representational form. He also contributed to the De Stijl a movement founded by Theo Van Doesburg. His famous paintings include Boogie Woogie (1943), Composition II in Red, Blue& yellow(1930), Gray Tree (1911), Willow Grove: an impression of light and shadow (1905) to name a few. He is also known for creating two versions of Still Life With Ginger Pot in successive years ( 1911& 1912 ) in an attempt to simplify his work.

Piet Mondrian was born in Amersfoort in the Netherlands on 7th March 1872. He descended from Christian Dirkzoon Monderyan who lived in The Hague (in 1670). Piet grew up in a devout Calvinist home and was exposed to art and music at an early stage. He was guided and taught by his father and uncle. His father was a headmaster and art teacher of the local primary school. His uncle Fritz Mondrian was an accomplished artist.


Career as an artist

Piet Mondrian enrolled in 1892 and trained for three years in the Royal Academy of Visual Arts in Amsterdam. He later supported himself by producing copies of museum paintings and giving private drawing lessons. From 1905 he began to reveal a new sense of drama and light through his traditional landscape paintings. Mondrian was introduced to the French Post Impressionists by Jan Toorop, an artist of Dutch Luminism. This brought about a dramatic change in his paintings.

In 1911 Piet Mondrian moved to Paris and came under the influence of the Cubist style of Picasso and Georges Braque. Their influence can be seen in his painting The Sea (1912). While in Paris he changed his name to Mondrian dropping an extra ‘a’ from Mondriaan. Later in 1913, he began to fuse his paintings and his Theosophical studies. This signaled his break from representational painting.

Piet Mondrian was drawn to spiritual and philosophical studies. He joined the Theosophical Society in 1908. This organization was based on the teachings of Buddhism. His work The Evolution (1910 – 1911) echoes the Buddhist and Theosophical movement. He was inspired by the book ‘The Secret Doctrine’ written by Helena Petrovna Blavatsky, who launched the Theosophical movement.  He says “To approach the spiritual in art, one will make as little use as possible of reality, because the reality is opposed to the spiritual.”

Piet Mondrian visited the Netherlands in 1914 and had to remain there because of the World War. He stayed at Laren artist’s colony, where he met Bart Van der Leck and Theo Van Doesburg. This meeting was significant. With Van Doesburg, he founded the De Stijl, a journal in the De Stijl group. Here he published his essays defining his theory called Neo Plasticism. During 1917 & 1918 Mondrian published “The new plastic in painting” (De NieuweBeelding in de Schilderkunsi) in twelve installments.

Piet Mondrian is recognised for the purity of his abstractions. He simplified and reduced shapes to lines and rectangles. This pictorial vocabulary and asymmetrical balance are used in the development of modern art. His book on Neo Plasticism is one of the critical documents of abstract art. “Plastic” refers to the action of form and colors in the canvas to represent modern reality. His influence is seen in all aspects of modern culture. His style can be seen in the development of “Minimalists” in late 1960.

In Piet Mondrian's earlier paintings, the lines delineating the rectangular forms are relatively thin & gray. The forms were small and numerous, filled with primary colors. Very few were in white. Later the lines became thick, and forms were larger and fewer. There were white forms. As the years passed, all lines were extended to the edges of the canvas. There were very few colored forms and more of white.

In mid-1920, Piet Mondrian began producing ‘The lozenge works.’ These are square canvas tilted 45 degrees so that they have a diamond shape. An example is Schiderij No 1: lozenge with two lines and blue (1926) on display in Philadelphia Museum of Art. It is also called Composition in Blue & Yellow.

When the war ended, Piet Mondrian returned to Paris and produced grid-based paintings, the style for which he became famous. He remained in Paris till 1938 and left for London. In 1940 he went to Manhattan where stayed till his death in 1944.