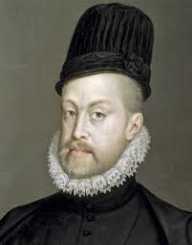 Philip II of Spain served as King of Spain, King of Portugal, King of Naples and Sicily, as well as King of England and Ireland. He was also Lord of the Netherlands, Archduke of Austria, Duke of Burgundy, and Duke of Milan.

Philip II started dealing with state affairs at the age of 16. In 1554, he married Queen Mary I, making him King of England and Ireland. She died four years later, so he lost his claim to the throne. In 1556, his father passed away, making him King of Spain. He started managing the country’s growing debt. He had to declare bankruptcy and take out several loans.

He was a firm Catholic, so he fought against heresy. He also fought against Protestant and Islamic forces. He took part in the Italian Wars, the French Wars of Religion, the Dutch War of Independence, and the Portuguese succession crisis. He managed to win most of the battles he fought. He improved the political structure of the Spanish colonies in South America. He supported many artists and poets, thus starting the Spanish Golden Age.

In 1543, Philip II married his cousin, Maria Manuela of Portugal. They had a son named Carlos. Maria Manuela passed away from childbirth in 1545. In 1554, he married Mary I, Queen of England and Ireland.

They had no children. Mary became ill and passed away in 1558. In 1559, he married Elisabeth of Valois, the daughter of Henry II of France. They had two surviving daughters, named Isabella and Catherine.

They had several more children that died during infancy. Elisabeth passed away after a miscarriage in 1568. In 1570, Philip married his niece, Anna of Austria. They had four sons, named Ferdinand, Charles, Diego, and Philip, as well as a daughter named Maria. Anna passed away from heart failure in 1580.

Philip II died from cancer on September 13, 1598, in the Royal Site of San Lorenzo de El Escorial. He was 71 years old. Philip III, his youngest son, succeeded him.