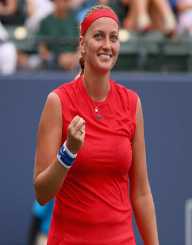 Petra Kvitova was born on March 8, 1990, in the Czech Republic. She was born to Jiri and his wife. She was brought up alongside two siblings, Jiri ad Libor. She was introduced to tennis by her father. Admired Czech American player Martina Navratilova inspired her. She trained in her hometown until she was sixteen years old. In 2008, she started training tennis under David Kotyza.

Petra Kvitova began her tennis career in 2007 at the 2007 Wimbledon Championships. In the same year, she participated in the 2007 ECM Prague Open, but she lost in the second round of qualifying. She also competed in the 2007 Nordea Nordic Light Open where she lost in the first round. In 2009, she earned her first WTA Title by winning against fellow Czech player Iveta Benesova at the 2009 Moorilla Hobart International. She also reached the fourth round of the United States Open. In 2010, she entered the semi-final round at Wimbledon.

In 2011, Petra Kvitova emerged among the top players on the women’s tour. She won Open Gaz de France after defeating Kim Clijsters. She also won at the Mutua Madrid Open. At the age of twenty one, she beat Maria Sharapova to win the women’s singles title. In the same year she won the WTA Tour Championships. She was ranked position two that year. In 2012, she lost to Serena Williams at the Australian Open and French Open. She lost to Serena while defending her Wimbledon Crown. In 2014, she regained her Wimbledon title when she defeated Eugenie Bouchard. In the same year she assisted the Czech Republic in beating Germany to win the Fed Cup. In 2016, she received the Bronze medal at the 2016 Rio Olympics.

In 2014, Petra Kvitova started dating Czech hockey player Radek Meidl. They got engaged in 2015 but they separated in 2016. She is currently twenty seven years old.