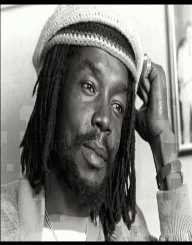 Peter Tosh was a well-known reggae artist who was born in Jamaica on October 19, 1944. He was the founding member of the band known as the Wailers together with Bunny Wailer and Bob Marley. Peter Tosh became so famous in his musical career when he embarked on a solo career promoting the Rastafarian religion. Tosh died in his home in Jamaica in 1987 during an attempted robbery where he was shot dead.

Peter Tosh was born as Winston Hubert McIntosh on October 19, 1944, in Westmoreland, Jamaica. Tosh was brought up by his aunt in Grange Hill since his parents were too young to raise him. He started exhibiting his talent in singing at an early age being inspired by the American radio stations.

During his childhood, Peter Tosh learned to play the guitar he had stolen from a church. At the age of fifteen his aunt died, and so Peter moved to a town in Kingston Jamaica known as Trench. It is there at Trench that Tosh met Bob Marley and Bunny Wailer in early 1960s and began their vocal practices with the voice teacher Joe Higgs.

As the three developed their musical talents and stability, they decided to form a band in 1962 and named it ‘The Wailers.’ By 1964, the trio had harmonized in their voices, and Tosh helped in organizing the band. The band was intact and up to game releasing their first major hit single “Simmer Down” and many more singles.

By early 70s, the band had expanded and was one of the most admired groups. They had sold over 250 million albums from the time they began with many more albums being released. But in 1973, Bunny Wailer and Peter Tosh left the group and Tosh resorted to producing his music.

Having left the band, Peter Tosh released his first debut in 1977 with the name Equal Rights. This album was after he had released, Legalize It in 1976. Tosh became an ardent believer in the Rastafarian religion and embarked on promoting it and fighting for the legalization of marijuana.

With this zeal and dedication, the members of the Rolling Stones band (Mick Jagger and Keith Richards) were attracted to Tosh’s work and therefore signed him in 1978 to their label which made acquire a bigger platform and audience.

This saw Tosh participate in some concerts including the Bob Marley One Love Peace concert in 1978 and the Anti-Apartheid concerts. In his solo career, Peter Tosh was awarded a Grammy for giving the best reggae performance in 1987. Peter also gained interest in unicycles, and this was his favorite flip anytime he went to stage for his shows.

When Peter Tosh returned home after his eventful tours to see his family and friends there, he met his untimely death on September 11, 1987. Three armed men on a motorcycle rode to his home in the Kingston Suburb of St Andrew and demanded him to give them money. Tosh retorted that he didn’t have any money with him in the house. The infuriated gunmen shot Tosh twice on the head and six other members of his household including his wife, Andrea Marlene.

Peter Tosh is celebrated for his legacy in being the core founder of the most famous reggae groups in Jamaica. His son Andrew Tosh has long since taken the spirit of his father and is walking in his footsteps. He is also remembered for his zeal in promoting his Rastafarian beliefs, and to this day his family still celebrates his birth and rise to fame and success. His family also opened a museum that was dedicated to Tosh in Kingston Jamaica where live reggae music is played when celebrating his birthday.