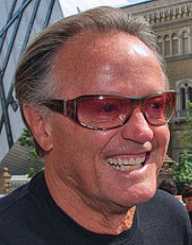 Fondly remembered as the ‘Father of Modern Satire,’ American actor and comedian Peter Edward Cook was born on 17 November 1937, in Shearbridge, Torquay, Devon. He was one of the three children born to Alexander Edward Cook and Ethel Catherine Margaret and was their only son. Peter’s father worked as a colonial civil servant.

In his early days, Peter aspired to join the civil services and become a diplomat by following the footsteps of his father. Subsequently, he took admission at the Radley College and Pembroke College, Cambridge where he learnt the languages French and German. However, he soon lost interest in his previous aspirations and was drawn towards the art of comedy. In 1960, while studying at Pembroke College, Peter was highly influenced by fellow comedy writer David Nobbs. As a member of the Cambridge Footlights Dramatic Club, he started writing comedy sketches. The students of Cambridge University ran the amateur theatrical club and soon, Peter was appointed as the President of the club.

One of his first projects was for famous comic actor Kenneth Williams. Peter Cook wrote several humorous sketches for the actor’s famous comedy revues ‘Pieces of Eight’ and ‘Over the Eight.’ However, the first milestone of Peter Cook’s career came with ‘Beyond the Fringe,’ a satirical stage show that Cook had created by collaborating with Jonathan Miller, Alan Bennett, and Dudley Moore. Cook’s impersonation of Prime Minister Harold Macmillan was highly applauded.

In 1961, Peter Cook opened a members-only club called ‘The Establishment’ at 18 Greek Street in Soho. It was a sort of a nightclub where comedians could perform their acts without the fear of censorship. Cook forayed into television in 1962 with Granada Television’s show ‘Braden Beat.’ In ‘Braden Beat,’ he portrayed the character of E. L. Wisty, a grim and boring person. Cook and Dudley Moore shared a brilliant comic partnership, and a proof of this bond was the super hit comedy show ‘Not Only… But Also’. The show that aired on BBC ran for a total of three series from 1965 to 1970.

Cook and Moore began their film careers simultaneously acting in movies like ‘The Wrong Box’ (1966) and ‘Bedazzled’ (1967). The two again teamed up for ATV’s show ‘Goodbye Again.’ But the show failed to live up to the expectations due to Cook’s increasing alcoholism and lack of preparations. In 1970, Cook acted in the film ‘The Rise and Rise of Michael Rimmer’ which was based on the life of an opinion pollster who becomes the President of Great Britain. Though the film had a brilliant star cast, it failed to create a buzz at the box-office.

The renowned pair of Cook and Moore was once again seen in the revue ‘Behind the Fridge.’ For this act, the two revised materials from their previous shows ‘Not Only… But Also’ and ‘Goodbye Again.’ In 1973, they toured Australia and America performing the show in various places. The show won them several awards including a Tony Award and a Grammy Award. In 1976, the duo carried forward their partnership for the album ‘Derek and Clive’ where Moore played the character of Derek and Cook played the role of Clive. In later years, two more sequels of the album were released. The duo also anchored Saturday Night Live on 24 January 1976, during its first season.

After Moore decided to stay back in the US and concentrate more on his acting career, Peter Cook began to focus more on the satirical magazine ‘Private Eye.’ Cook had a long association with the magazine. He also continued to appear in several films and television shows. He was a regular guest on many talk shows. Some of his popular film appearances include ‘The Bed Sitting Room’ (1970) and ‘The Princess Bride’ (1987). He also acted in many television shows and sitcoms like ‘The Two of Us,’ ‘The Black Adder,’ ‘Tales of the Unexpected,’ ‘The Comic Strip’ and ‘A Life in Pieces.’ Cook was also a promoter of the NGO Amnesty International and consequently performed in three fundraising shows collectively called ‘The Secret Policeman’s Ball.’

The four men of the satirical stage show ‘Beyond the Fringe’ were awarded the ‘The Antoinette Perry Award’ for Excellence in Theatre.

In 1966, Peter Cook shared the BAFTA Award in the category of ‘Best Light Entertainment’ with his partner Dudley Moore.

In 1974, Peter Cook and Moore again shared a Grammy Award and a Tony Award for the revue ‘Behind the Fridge.’

In his lifetime, Peter Cook tied the nuptial knot three times. He married his first wife Wendy Snowden in 1963, and the two had two daughters, Lucy and Daisy. They got divorced in 1971. In 1973, Peter entered into wedlock with actress and model Judy Huxtable. However, this marriage also ended in divorce in 1989. He finally got married to Malaysian-born Lin Chong who was a property developer by profession. Lin was instrumental in bringing about stability in Peter’s life and also helped him get rid of his alcoholism for a brief while. Peter and Lin stayed together till the former’s death.

The famed comedian who was considered as one of the most influential figures of the British satire boom breathed his last on 9 January 1995. The 57-year-old succumbed to gastrointestinal hemorrhage in Hampstead, London, England.