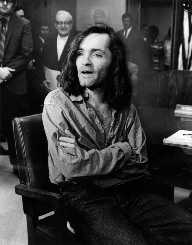 Paul Alan Watkins was born on 25th January 1950, in California, in the United States. As a youngster, Watkins happily went to church, and this was a theme that carried through to his early teens. He became a Bible student and actively participated in church camps and youth organizations. When he enrolled in high school, his religious views had begun to take a back seat to his music, which was his main interest.

Watkins decided to drop out of high school in his senior year. He had been taking psychedelic drugs for some time, and he was in search of enlightenment as so many were during the 1960s.

During the 60s, a man named Charles Manson came to prominence for all the wrong reasons. He had hippy orientations, but he was a criminal and built a cult which became known as The Manson Family.

Manson and some of his followers were squatting at a house in a Los Angeles County, which was where Watkins met him. Watkins had gone to the house to visit a friend, but the person was no longer living there.

Watkins stayed the night and left, but for the next three months or so lived the life of a hippy. He looked after a farm for most of that time as the owners had gone to Hawaii and needed a caretaker for their property.

He bumped into two of the girls he had met the night he went to the Manson house, and he got a lift with them to where the family was currently staying. Watkins stayed with the Family, and soon became Manson’s, right-hand man.

Watkins helped set up two more bases for the Family at ranches that were seldom used, near Death Valley.

Manson believed that the black population were going to rise-up and rebel in the U.S. He delivered his prophecy on New Year’s Eve in 1968, and Watkins was present to hear the speech. Manson called it the HelterSkelterprophecy.

Manson decided he would help precipitate the violence by sending Family members to commit murders. He gave instructions to Watkins to prepare the desert homes with supplies. Watkins knew from the instructions and previous conversations, that murders were imminent.

Watkins took his opportunity to escape from the Family while he was supposed to be setting up the desert homes for them all to move into. He moved in with some other friends and watched the murders start to unfold on the television in August 1969.

Shortly after the nine murders, the Family had moved into one of the houses which was on a ranch. Watkins moved between the Manson house and the other house where his friends lived.

Watkins eventually stayed away from the ranch, knowing that it was only a matter of time before law enforcement caught up with the Family.

The ranches were raided in October 1969. Manson and his followers were arrested for vehicle theft. By mid-November, they had been linked to the murders, and by December the case had been solved.

Watkins gave testimony to the Los Angeles District Attorney which helped cement the case. Despite all this, Watkins continued to visit Manson in prison and became the leader of the Family in Manson’s absence.

In March 1970, Watkins had a fight with some of the members and split away from the Family.

In May of the same year, Watkins made the decision to testify against Manson in court.

Life After The Family

Watkins went on to become a member of his local community. He was the founder and first president of the Death Valley Chamber of Commerce. Watkins also lectured on the psychology of cults, and the effects of substance abuse.

In 1979, a book was released that had been co-written by Watkins, called, My Life with Charles Manson.

Watkins was found to have leukemia, and he died in 1990.