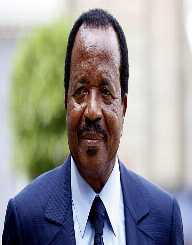 Paul Biya is the 2nd and current President of Cameroon, Africa. He has been re-elected for six terms.

Paul Biyal has two brothers and five sisters, and the family was poor. When he was seven, he was sent to a Catholic mission to study. He arrived in Ndem, where he first started his formal education in 1948.

While in Ndem, his tutor noticed his intelligence and suggested that he aim for the priesthood. Paul transferred to St. Tharcisius Pre-seminary in Edea, studying for two years before going to Akono Junior Seminaries two years later.

From 1954, Paul Biya studied in Lycee General Leclerc in Yaoundé, where he learned Greek and Latin, as well as subjects needed to study to become a priest.

Through his hard work, Paul Biya was awarded a scholarship to study in Paris, where he stayed in Paris and attended the University of Paris.

Paul Biya majored in law and political science and graduated in 1960 with a Bachelor’s degree in Public Law, and a diploma in International Relations. Paul lived in Paris for twelve years.

French Cameroon gained independence from France on 1 January 1960, with its first President Ahmadou Ahidjo. A year later, the British Southern Cameroons were liberated, and together they form the Federal Republic of Cameroon.

Paul Biya decided to return to Cameroon in 1962, becoming Charge de Mission, or assistant in the Presidency.

Paul Biya was promoted to the rank of Minister, in 1968, and two years later he gained Minister of State. President Ahmadou became his mentor, despite both were in different religions. Paul was then nominated as a Prime Minister of Cameroon in 30th of June, 1975.

Paul Biya held that post until 1982, when President Ahmadou resigned in November 1982. Following the Cameroon constitutional law, Paul succeed as the second President of Cameroon.

Even though Paul Biya was President, the leader of Cameroon National Union (CNU) was still Ahmadou Ahidjo. Paul was made Vice-President of the CNU and was in charge of affairs during its president’s absence.

Following two failed coup attempts in 83 and 84, Ahmadou was arrested and was sentenced to life in prison for the attempt.

After winning the election in 1984 to cement his Presidency, Paul Biya dissolved CNU the next year, forming Cameroon People's Democratic Movement, in Bamenda.

After his second term win in 1988, Paul Biya changed the law to permit and legalize opposition parties. The first opposition party was Social Democratic Front (SDF). Since 1992, Paul Biya had won all the elections via majority, with the party crying foul and rigged elections.

Paul Biya made amendments to the Constitution in 1996, to remove the two-term limit for Presidents, citing unfair on limiting people’s choice. He went on to win four more terms.

Paul Biya married first wife Jeanne- Irene in 1960, they did not have children together. Jeanne adopted Frank Biya, who was a child of an extramarital affair. Jeanne- Irene passed away in 1992.

Paul Biya married Chantal Pulchérie Vigouroux in 1994. She was thirty- eight years younger than he is, Chantal gave him a son and a daughter.