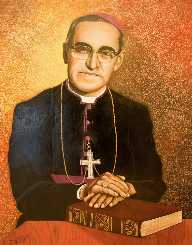 Oscar Romero was the Archbishop of San Salvador. He was a humanitarian for those living in poverty and fear in El Salvador.

Oscar Romero attended school until third grade. Later he was taught at home. When Oscar Romero was thirteen years old, Oscar Romero attended a divinity school in San Miguel. Oscar Romero continued to study theology at the seminary in San Salvador. Later he transferred to the Gregorian University in Rome. Even though the war was going on in Europe at the time, he remained there to complete his Licentiate in Theology in 1941.

Oscar Romero was ordained a year later. Oscar Romero continued to earn his doctorate in theology, which he completed in 1943.

Upon his return from Rome, Romera and his friend Father Valladares traveled through countries including Spain and Cuba. The two were detained in Cuba and imprisoned for several months. After Valladares fell ill, they were transferred to a hospital and later released. When Oscar Romero returned to El Salvador, he started his priesthood in Anamorós before transferring to San Miguel.

Oscar Romero made numerous contributions to the Catholic church and its members of San Miguel. Oscar Romero helped in the building of the cathedral, but also helped the community through the Alcoholics Anonymous association he formed. He was promoted to Rector of a seminary in San Salvador. In 1966, Oscar Romero took on other duties for the church. He was appointed the Secretary of El Salvador's Episcopal Conference. Oscar Romero was also the director of the archdiocesan newspaper Orientación. During his directorship, the tone of the paper became more conservative. The paper was trying to create awareness of what was going on around them including torture and repression. In 1970, Oscar Romero was appointed an auxiliary bishop for the Archdiocese of San Salvador, then Bishop of the Diocese of Santiago de Maria in 1974.

His highest promotion came in 1977 when he was appointed Archbishop of San Salvador. His conservative reputation caused concern to those in the priesthood who were more progressive and supportive of the Marxist ideology. Still, there were many who were pleased with his appointment. As Archbishop, Oscar Romero would do more than give Mass in the church. His weekly radio sermons were famous throughout El Salvador. Oscar Romero spoke out against the violations of human rights that were going on in the country.

Oscar Romero would list the names of the people who disappeared, returned tortured or were killed during these radio sermons. Oscar Romero also promoted his ideas of a conservative Catholic theology rather than one that promoted Marxist beliefs.

Oscar Romero also spoke out against the persecution of members of the Catholic church who worked to help the poor. Members of the church including the clergy and the nuns were being attacked and even murdered. Even his own life was threatened. Government and right-wing groups were responsible for the escalation of violence in 1979, which later became a civil war. Oscar Romero would gain international attention as he vocalized his concerns for the people who help the poor as high up like Pope John Paul II.

Oscar Romero even advised President Jimmy Carter not to provide additional military aid to the government because it would increase the persecution and terror. Oscar Romero spoke out to the people, particularly the Salvadorian soldiers, to stop persecuting the poor on the orders of the government. The next day, Oscar Romero was giving Mass at a chapel in La Divina Providencia hospital.

Oscar Romero was assassinated during Mass. In 2010, reports show that the assassination was ordered by the founder of the Nationalist Republican Alliance party, Major Roberto D'Aubuisson. During his funeral service attended by more than 250,000 people, bomb attacks and gunfire killed more than 30 people who came to give their last respects.

Oscar Romero died on March 24, 1980, at the age of 62. Oscar Romero was giving Mass when he was assassinated by an unknown gunman. Romero's humanitarian efforts have not gone forgotten. Each year in March, the Irish-El Salvador Support Committee conducts Mass in Romero's honor and memory. Movies have been made concerning the Archbishop including Choices of the Heart, Salvador, and Romero.

Oscar Romero was diagnosed with obsessive-compulsive personality disorder in 1966.

Oscar Romero worked to help the poor. However, Oscar Romero had to deal with the oppressive rule of the government. Members of the church who supported the poor were being tortured or murdered.

Despite the dangers and the threats, Oscar Romero continued to speak out for Catholic theology and against the repression of basic human rights.