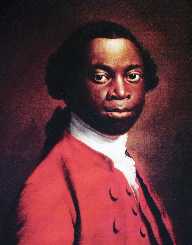 Olaudah Equiano, a slave turned antislavery activist, was born in 1745 in Igboland, Essaka. The region is situated in the present day Southeastern Nigeria. He was from the local Igbo tribe and was the youngest of the seven children of his parents. At the age of 11, he was kidnapped along with his sister while keeping a vigil over the courtyard of their home. Kidnappers took them to faraway places and sold them to local slave traders separately. The local slave traders kept Equiano in Africa for a short period and eventually sold him to the European slave traders. These traders brought Equiano across the Atlantic sea to Barbados in West Indies along with many other African slaves. They further traded him and sent him to the British Colony of Virginia accompanied by another few selected slaves.


EXPERIENCING THE HORROR AND HARDSHIP OF SLAVERY

Michael Pascal, a Royal Navy Lieutenant, purchased Equiano from the slave traders in Virginia. Pascal renamed Equiano as Gustavus Vassa, which stayed with him until he became famous after writing his memoir. As a slave, Equiano experienced and suffered the brutal and inhuman treatment meted out to him and other fellow slaves in Virginia. He did not approve of the new name given to him by his Virginia-based owner, Pascal. After repeated torture by various cruel and atrocious methods, he had to fall in line and accept his new name. Barring his autobiography, where he used his original name, he used the name of Gustavus Vassa in all his future official records.

LIFE AS A SLAVE

During the period of the seven years’ war between England and France, Pascal took Equiano along with him. He gave Equiano due training in seamanship. Due to this training, Equiano picked up the necessary skills required to help ship crews in times of an emergency. One of his duties was to pack gunpowder to the cannons lined up on the deck of their battleship.

Equiano’s dutiful, obedient compliance of entrusted tasks made Pascal sympathetic about his well-being. He sent Equiano to his sister-in-law in Great Britain. He intended to make Equiano attend school and become a literate person.

Upon his arrival in Great Britain, Equiano was baptized and converted to Christianity. Pascal’s cousins Mary Guerin and Maynard acted as his godparents. They also helped Equiano learn English.

England won the seven years’ war with France. However, Equiano was not freed as promised by Pascal. To his utter frustration, Pascal sold him to Captain James Doran of the Charming Sally of Gravesend. As a result, his possession changed soon afterward. Robert King, an American Quaker merchant trading in the Caribbean, purchased him from James Doran.

Equiano began working under King, his new master, camping at the Leeward Island of the Caribbean. King taught Equiano and made him adept in reading and writing. In 1765, King assured him that if he pays King his purchase price of 40 pounds, he will set Equiano free. Accordingly, Equiano engaged himself in gathering the required money. He undertook trading activity between Georgia and the Caribbean Islands and sold fruit, glass tumblers, etc. It eventually took Equiano two years to arrange the required amount of money to buy his freedom. In 1767, he finally earned his freedom by paying his purchase price of 40 pounds to King.

Equiano traveled to England after earning his freedom. His previous training proved handy as he could work as a deckhand during the voyage. Upon his arrival, he looked for trusted partners for starting a venture. He made acquaintance with Dr. Charles Irving, who evolved a process to distill the salty sea water. They joined hands and began a business of selecting and managing slaves. They remained friends forever after that though their business failed.

By 1780, he actively involved himself in the abolitionists’ movement. His agitation to end the slave trade got the much-needed impetus when he wrote his autobiography. He published the autobiography ‘‘The Interesting Narrative of the Life of Olaudah Equiano, or Gustavus Vassa, the African’’, in 1789. The book created an immediate impression upon the masses and brought about the much-needed momentum in the anti-slavery movement of the region. In the book, he chronicled his journey from a free man to a slave. He described the brutal torture he had to endure during the period of his enslavement, his adopted religion and the risk of slavery that the free Black people faced. Additionally, he vividly portrayed the miserable conditions of the slaves and the inhuman treatment meted out to them in general.

His book seemed to be much in demand. Within no time, the book had to be reprinted nine times. He also received a cult status in the society after the publication of his much appreciated literary work.

Equiano tied the nuptial knot with Susannah Cullen. The formal marriage ceremony was solemnized on April 7, 1792, in St Andrew's Church in Soham, Cambridgeshire. The couple together had two daughters, Joanna, and Anna Maria.