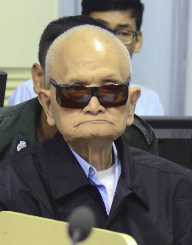 Also Known For : Chief Ideologist Of The Khmer Rouge

Nuon Chea attended school from the age of seven and was taught in French, Thai and Khmer. After graduating from high school, he enrolled at Thammasat University in Bangkok. As a student, he also had a job working at the Thai Ministry of Foreign Affairs.

Nuon Chea joined the Communist Party of Siam while still a student in Bangkok. Later he was elected to be the Deputy General Secretary of the Workers Party of Kampuchea. By 1960, he was at the top of the hierarchy, given the title the Brother Number Two, second only to Pol Pot. He was considered to be the party’s chief ideologist.

The Tribunal accused Chea of being part of an elite group who drew up and implemented the political thinking that resulted in forced labor, mass killings, and systematic violence. They also accused him of implementing policies that led to starvation in Cambodia.

When the Khmer Rouge were overthrown, Nuon Chea moved to the north-west of Cambodia, which at that time was still in the hands of the remaining Khmer Rouge fighters. Prime Minister Hun Sen granted him a pardon in 1998. International pressure demanded a review of the pardon, and in 2007 Chea was arrested.

In 2014 Nuon Chea was jailed for life, convicted of crimes against humanity.