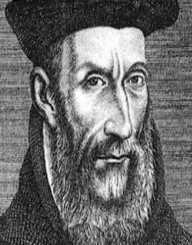 This Frenchman, Michel de Nostredame was both a medical practitioner and an astrologer who claimed to have seen visions of the future. He is still considered by many as having foretold the happenings of the future.

Nostradamus was born Michel de Nostradame. His date of birth is still a subject of debate. Some records put it as December 14, while others claim it as December 21. But all concur he was born in December 1503. His parents lived in Saint Remy de Provence.

This is found in the southern part of France. His father Jaume de Nostradame was a descendant of the Jewish tribe of Issachar. It was Jaume’s father who left Judaism for Christianity. His mother Reyniere de St Remy was a French Christian. The two came from scholarly families.

Most children from wealthy families were schooled at home. Nostradamus was no exception. His initial education was administered by his physician grandfather St Remy.

He left his family in 1518 to enroll for a degree in medicinal science. His stay at the University of Avignon was brief. Nostradamus left after his first year due to the closure of the institution.

The disruption was brought about by the outbreak of the bubonic plague that was ravaging France at the time. He later graduated from the University of Montpellier in 1529. This was after a troubled three years of studying medicine. Though a bright student, his views were always in dispute with the dominant Roman Catholic Church that controlled most of the learning institutions.

After the closure of the University of Avignon, Nostradamus went on a search of a cure for the ravaging disease. His journey which started in 1521, took him to the southern parts of France and parts of Italy.

Though considered clandestine, his methods of containing the plague saved many lives. This made him a celebrated figure in the French medical circles. Nostradamus emphasized the need for high standards of hygiene. The most effective was the pill he made out of the rosehips. The vitamin C found in the rosehip pill was effective in saving most people from imminent death.

His fame brought him a fortune. The wealthy families in France patronized him for his services. On the other hand, the Catholic Church hated his unlicensed pharmacy practices. His constant arguments with the church led him to exile in Europe after he fell out with the church in Agen. This was in 1538.

It is not well established when Nostradamus embraced the divination practices. But most sources place it during the time of his exile. After nine years in exile, he returned to his birthplace. With the plague contained, Nostradamus concentrated with his newfound trade, divination. His first book on prophecies came in 1550. Using poetic verses and other foreign languages, Nostradamus conveyed his predictions without irritating the church.

By 1554, Nostradamus was so popular with his predictions that even the royal family in Paris invited him. He spoke of the death of the king and the rise of the four princes to the throne. All this came to pass making Nostradamus a revered figure in France.

The king died in the very circumstances Nostradamus predicted. The four princes all became kings but died at a young age in succession. With his predictions coming true, he continued writing books on his prophecies to the delight of the masses.

Most of the major events in the world have been linked to his prophecies. Though some have similarities, the actual events have some glaring gaps in the way they unfolded.

Nostradamus was one of the nine children in his family. In his married life, he married twice. His first marriage was in 1531. The couple had two children. The wife and children were wiped out by the plague in 1534. He then remarried Ann Ponsarde in 1547. They had six children together.

Though he practiced occultism, Nostradamus remained true to his Catholic faith.

Though a physician himself, Nostradamus battled with acute arthritis in his late life. He died on July 2, 1566. He was 66 years of age. His body was initially buried in Salon but later exhumed and reburied in Saint Laurent.

Since the prophetic books and events predicted by Nostradamus still evoke curiosity, the legacy of his life will still be an enigma to most scholars. His simple life, intellectual wit, and articulation of his ideas will always be a subject of debate for a long time to come.