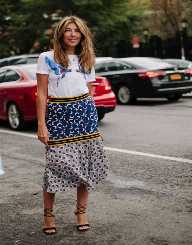 Ninotchka Garcia was born on 3rd May 1965, in Barranquilla, Columbia. Her father was an importer, and her mother was an actress. The family was a wealthy one, and Garcia was exposed to regular international travel, seeing many cultures of the world from a young age.

Her parents sent her to the Dana Hall School in Massachusetts, primarily to escape the escalating violence in Columbia. She graduated in 1983, and then went to Boston University, where she graduated with a Bachelor Degree in Liberal Arts.

Ninotchka Garcia then enrolled at Ecole Superieure de la Mode in Paris, where she undertook a course in fashion. After that, she returned to the United States and enrolled at the Fashion Institute of Technology in New York. She graduated in 1992 with a Bachelor Degree in Fashion Merchandising.

Ninotchka Garcia began her fashion career by working in the public relations department of Perry Ellis, with Marc Jacobs who was the designer at the time. She then took up the position of Assistant Stylist and Market Editor at Mirabella.

In 2000, Ninotchka Garcia became the Fashion Director at Elle, where she remained until April 2008. In April 2008, she became the Editor-at-Large for the magazine, a position she only held until September that year.

Ninotchka Garcia then left Elle to go to Marie Claire magazine, as their Fashion Director. She was still with the magazine in 2013, when she was promoted to the position of Creative Director.

In 2007, Ninotchka Garcia was a judge on the first season of the television series, Project Runway.

Ninotchka Garcia is married to David Conrod, and they have two sons, Lucas and Alexander.